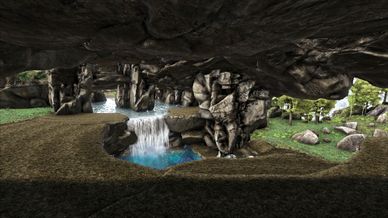 Kuris Cave is a cave in the Ruinous Jungle.

This cave offers 3 huge entrances and lake inside.

This cave has no resource spawns.

The cave was named after one of the map's play testers Kuri (also known as Taiine/IronBlockGames), as she resided in this cave during the map's early development on the Dev's test server. This cave isn’t as bright as it is in the picture, you would have to put up a lot of torches or other light sources to be able to see. Once lit up, it’s a very beautiful cave.