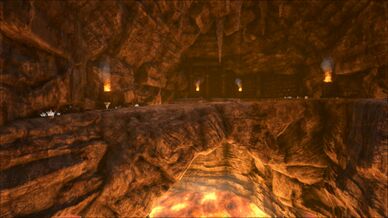 LavaCave is a region in The Center DLC.

The LavaCave is in the East of the Lava Biome, and it is one of the hardest caves in the DLC: The Center.

It is almost impossible to access the cave without a Pteranodon, Argentavis, or Quetzal. One could enter using Grappling Hooks or Climbing Pick (Aberration), albeit an extremely difficult prospect.