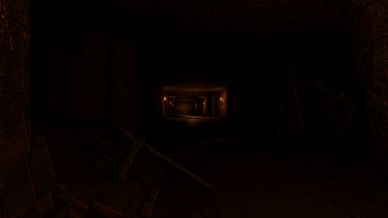 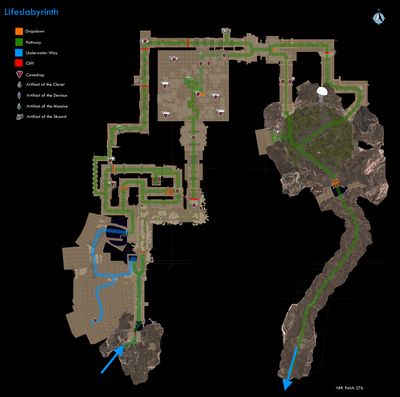 The entrance to the dungeon is found under a rock formation in the north of the desert, at the foot of the mountains. Specifically, the entrance is on the south-west side of the formation and can only fit a crouching human and very small dino, such as a

Dodo You will need supplies found throughout this page in order to survive the labrinthe, so make sure you read the article through before embarking on your journey, to make sure you make it all the way through!

The entrance place has spikes popping up so be cautious of these. Once the player has entered, they are met with a maze-like room with buttons scattered around the walls. The buttons are allocated letters, some are duds and the others must be pressed in a certain order to proceed through the dungeon. The entrance to the next area is in the enclosed room directly opposite the entrance of the room (Next to the dud "L" button), take note of where it is as you will need to run there as the floor opens once the button is pressed and shuts after a certain amount of time.

The buttons need to be pressed in this order G R Á T A (GRÁTA). There are 3 button easily accessible: "G", "Á" and "T" however the other two need finding. The "R" button is over the wall to the north-east corner of the room, it is accessible by jumping along the edges, upon the two buttons placed diagonally on the wall. The final button "A" is in the little box up in the south-east corner, on the roof. To access this, the player will need to jump onto the "T" button off the pile of rubble next to it, making their way around the western edge of the room and jump up the walls that step up. Be careful as wrongly timed jump will knock the player down to the floor. The next goal is to get on the roof at the center of the room where from the player can sprint jump into the box with the "A" button.

Once pressed in order the floor opens a long shaft dropping down to the next area. As players drop into water at the bottom, no parachute is required here.

Swim towards the corridor and make your way down it. You come to a dead end, however once you move close enough the door will open.

CAUTION do not run straight into the room. The large statue at the back of the room will spit fire at the player (Instant Kill to no armor players) if the wrong path through the room is taken. To not activate the fire, you need to crouch or prone, plus not touching any statue or uneven floor. It's ill-advised to let many players enter this room at once. If one make a mistake, the entire team is burnt. Pass this room one by one.

The two exits to this room are at the back of the room, either side of the statue and decide the path the player will take through the labyrinth. The room is full of buttons, the button that opens the right-hand door is immediately left on the rear wall as you enter the room. Alternatively, the button that opens the left-hand door is underneath the statue, protruding out of a pile of rubble.

If you decide to break through this section via armor and spamming Health Brew, it's advised to use immediate-repairable armors such as cloth or hide, or bring a spare of it, as they will lose durability drastically when you are on fire.

At this point, you will need to split your group or re-run the Dungeon later following the other way to obtain all artifacts of the dungeon.

Following the left side you will find the

Artifact of the Skylord.

Following the right side you will find the

Artifact of the Clever.

Both of these lead in the end to the Sacrifice Room.

A jumping puzzle is up next if the right door was chosen. In order to continue players must press the button on the right-hand side to raise the wall. Players need to jump their way through the puzzle. Be prepared to fall a lot and getting back to the beginning of the room by climbing a fallen column. As it is quite dark the use of any light source (e,g.

Torch or Abberrant Shoulder Pet) is highly advised. Part way through, the platform just before the column wedged between the two walls is a pressure activated trap which releases gas around the player. You can either lie down and face the wall to get away from the gas or quickly jump onto the next platform (the column).

This room will be full of

Onycs and within this room. They are spawned by invisible trigger. When you reach the stair leading to the exit, the exit will shoot Spear Bolts, which hurt a lot. Staying at sides to prevent triggering this trap. The right-hand button next to the exit opens the door.

The loot crate is trapped with arrows shooting at the player if they get too close but can be opened by slowly edging towards it. The button that opens the exit here is on the left-hand side BUT is the one closest to the exit, the other button next to it is a trap and releases a cluster of 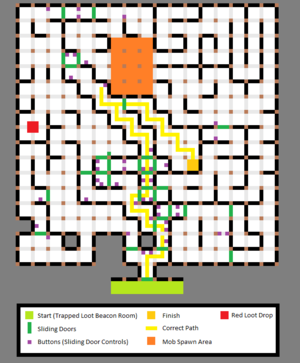 A simple map of the maze section of Life's Labyrinth

This section is a partly lit up maze full of opening doors via buttons. There are high level creatures (such as

Arthropluera) in this section so weapons and torches are needed.

A long swim is before you!

SCUBA Tank its recommended to use one, or bring Lazarus Chowder.

In addition to these traps there are hidden spikes in the floor that will immediately kill you, should you fall into those.

The exit is the door on the outer side where the narcotic trap is. To open the exit you need to find 2 doors and a button in the middle.

Run back where the 2 doors are to find that you opened a room that was behind the left door. You can see a button in the middle and 2 on the right press all 3. (middle button opens a door to go further back, the top right button opens to a red drop, bottom right is the second button in sequence to open the exit)

Now run to where the narcotic trap is, and on the right side is the exit.

Shooting traps on the ceiling. To continue you need to open the door at the end of the tunnel, the button to open it is on the left side where you enter the tunnel (in-between the pillar and the wall). The exit will shut quickly so just run through it and don't look back. Additionally there is a button just before the exit opening a small room containing a loot crate, request you to press it and look back. If you run out the time and the exit shuts, just run back to the start point and press the button again.

Just jump to the end of this:

The player needs to make a sacrifice to further progress

If you sacrifice a dino (shoulder pet or any other) the left door opens. Next up is a dark tunnel (a light source such as a

Torch or Abberrant Shoulder Pet is recommeded as changing your Gamma settings won't work for this tunnel). Try not to step on any stone plates, which are pressure plates that summon Onyc.

If you sacrifice a human (player) the right door opens. Next up are closing, moving walls and 2 red drops in the middle. There will be a sign that warns you to walk slowly. This is a lie and in fact, you have to sprint through the tunnel before the walls collapse and trap you. Don’t forget to stop between the tunnels to pick up the red loot crates though.

Both ways lead to the Oasis.

Which ever path was taken at the Fire Statue room ends up in this final room, an oasis full of ruins,

Megaloceros and at the end are the

Artifact of the Devious and

Artifact of the Massive behind a barrier. To disable the barrier, the player must defeat the bosses of the dungeon, the

Spirit Dire Bear and the

Spirit Direwolf. If the spirits aren't present then attack the

Megaloceros and they shall appear (in order to get any of them to spawn at all, either a player or tamed creature MUST be put into the sacrifice pit in the sacrifice room, but need not to be killed, although there is no chance to save sacrificed creature without console commands(tested in v.291)). However, if the creature or player do survived, Tek Chestpiece and Climbing Pick may save them.

Spirit Direwolf will spawn in pairs and in waves, starting at level 50, and raising another 50 levels every wave, ending at level 250 (keep in mind that a level 250

Spirit Dire Bear will hit hundreds of points of damage on lightly armored targets). Bolas, tranquilizers, and traps may be useful to keep them in place (although this has not yet been tested). In larger groups, shields may also be utilized to tank while other players attack with ranged weapons.

After killing the spirits a message will appear saying "The spirits have calmed", the border vanishes and the artifacts can now be achieved. The exit to this room and the Dungeon is now accessible via the larger water grate. The exit is once again blocked by a very low passage--crawling is necessary. Keep to the right to make it out before the ceiling crushes you.

There are no resource spawns in this dungeon.