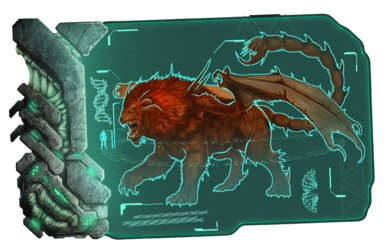 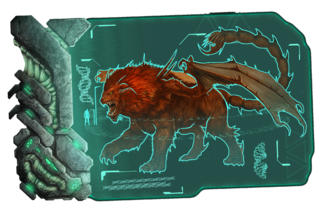 The Manticore is a Tribrid that consists of the body and head of a lion, with three rows of sharp teeth, Bat-like wings and ears, and a scorpion's tail that has toxic and lethal venom. While also having horns (2 pointing up and 2 Curled) on the top of its head, a furry body, and sharp claws, and spikes.

The Manticore is the Guardian for the Scorched Earth Ark (and the only one we know about).

The floor of the arena is teeming with Deathworms. The Manticore will primarily fly about the arena shooting purple bolts in different directions at once while using its tail to inflict torpor. Near the end of the battle Rock Elementals start spawning along with Deathworms and can easily trap and kill your creatures.