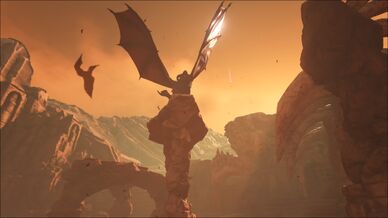 The Manticore Arena is an arena for fighting the boss of the Scorched Earth DLC, the Manticore. The Arena is 40°C or 104°F so bring good Hyperthermal Protection. Calien Soup is highly recommended!

Upon teleportation to the Manticore Arena, the

Deathworms lie in wait beneath the ground. A timer will immediately begin counting down from 25 minutes within which the boss must be defeated. Once the timer expires all players, dinos and items in the arena are destroyed.