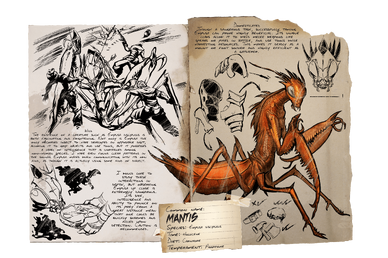 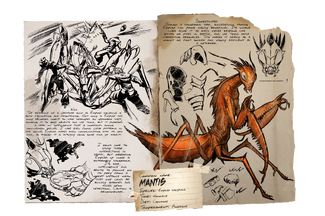 Dossier
These values may differ with what you see in-game or written elsewhere. But that is what the dossier says.
Group
Invertebrates
Species
Empusa discipulus
Time
Holocene
Diet
Carnivore
Temperament
Aggressive
Release Versions 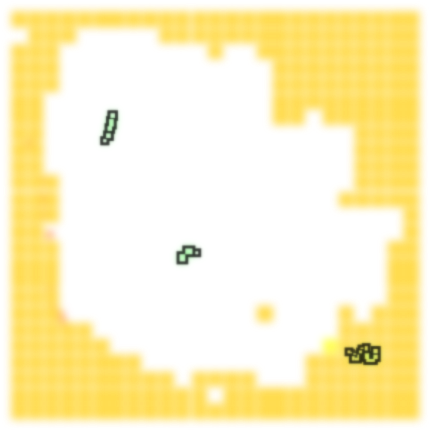 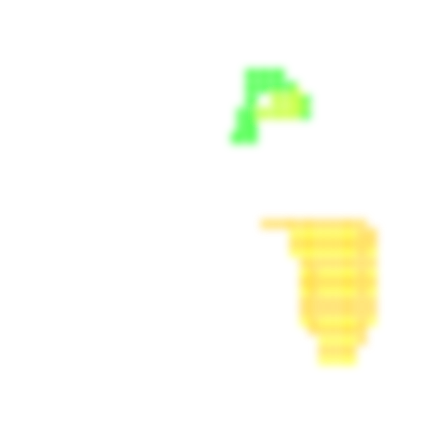 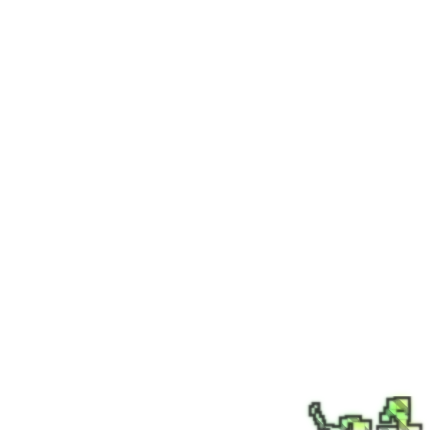 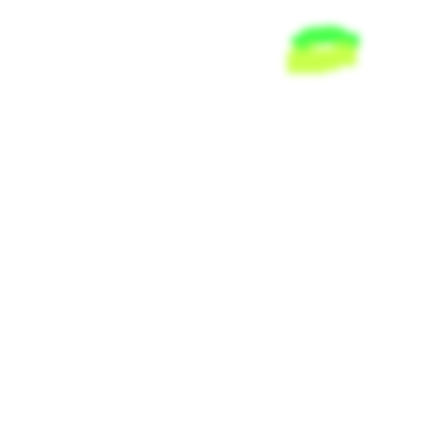 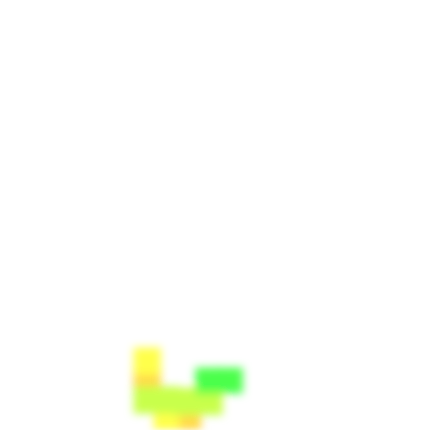 The Mantis is one of the Creatures in ARK: Survival Evolved. It was added in the Scorched Earth DLC on September 1, 2016, and included with the Ragnarok expansion on June 12, 2017.

Highly aggressive, it attacks any medium-size or smaller creature that enters its range.

It looks just like an average Mantis but much larger and deadlier. It usually comes from a light green to a brown or a yellowish color.

This section displays the Mantis's natural colors and regions. For demonstration, the regions below are colored red over an albino Mantis. The colored squares shown underneath each region's description are the colors that the Mantis will randomly spawn with to provide an overall range of its natural color scheme. Hover your cursor over a color to display its name and ID.

Mantis spawn in packs of around 2-3 individuals within caves and desert dunes. Due to their pounce attack they have a fairly large aggression range. Once one Mantis spots prey, the others usually follow. They will attempt to rapidly close the distance with an initial pounce before delivering an onslaught of rapid slashing attacks.

Avoid close combat unless you have a strong enough mount, or good gear. Due to the fact they spawn in packs they may often be mate-boosted, increasing the power of their fast and deadly attacks. If you don't think you can stand a close-up fight, range attacks with fire arrows or other powerful projectiles should do the trick easily.

One might consider using a Bow or a Boomerang to keep the mantises at bay and possibly knock it out for running away, or even building a trap around it to tame later. A Rock Elemental would be a great bodyguard in case there are too many to fight.

BEWARE of Pounce at Mid Range: with Mantis often spawning in groups of 2-3, taking three hits of this powerful attack can deal tremendous damage. Mantis are powerful melee attackers when wild, avoid close-quarters combat unless with good gear or a sufficient mount.

Its main weakness is bug repellant because it will enable you to attack the Mantis without being noticed if you're careful. Fire Arrows from a crossbow deal massive damage sometimes killing high levels (100+) with a single arrow from a primitive crossbow. However it is not an instant kill. It will take a few seconds but when attacking from a range there is very little to fear when using fire arrows.

The Mantis is a passive tame, so avoid knockout methods.

To feed it, place a

Deathworm Horn in the last slot of your hotbar, then when approached press "use" (default E) to feed it. You cannot feed them all the horns required for taming at one time, you must wait a few minutes after each feeding to give it the next one, and repeat until the taming meter is filled.

The Mantis is normally aggressive, so

Bug Repellant is needed in order to get close enough to feed it. A set of

Ghillie Armor is also useful, but not required. The Mantis becomes aggressive if you are too close. The taming progress will become halted until it loses interest in whatever it was fighting, or even decrease if it's aggressive for too long.

Ghillie Armor with this method.

Note: On the Ragnarok map, you can get the horns from the

Deathworms in the desert or from the

Iceworm Males in the Frozen Dungeon, where they provide a plentiful supply. However, given the high level of this dungeon, it might be safer to go to the desert.

The Mantis can equip a pick or hatchet, or even a sickle, allowing it to gather resources using these tools rather effectively when one does not have specialized mounts for such. Due to its ability to equip tools the Mantis can be used as a mobile light source by equipping it with a torch.

The ability for the Mantis to wield melee weapons, including the sword, allows it to be a fearsome combatant, but this also allows them to change up their tactics entirely by using a club, inflicting torpor damage against opponents as needed. Better weapons from better blueprints can massively increase the effectiveness of the mount's attacks, making this one of the only mounts where the quality of items other than the saddle is of great consequence.

Using simply primitive clubs, a high-level Mantis with average melee damage can knock out a mid-level scorpion (or even another Mantis) with a pounce and a few standard bash attacks. With higher end clubs and higher melee, the increased torpor could allow for Mantis to be used on more difficult tames.

Turkey Killer: While wielding a Sword, Pike or similar weapon, The Mantis ignores the damage reduction of the

For information pertaining specifically to the real-world Mantis, see the relevant Wikipedia article.