This article is about Megalania, not to be confused with 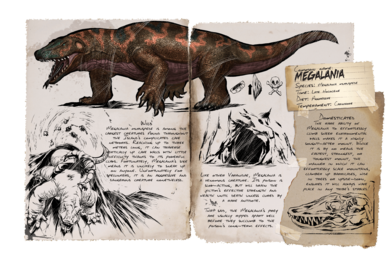 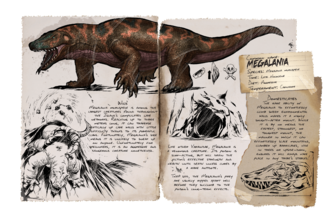 Dossier
These values may differ with what you see in-game or written elsewhere. But that is what the dossier says.
Group
Reptiles
Species
Megalania muruspede
Time Period
Late Holocene
Diet
Carnivore
Temperament
Aggressive
Release Versions

The Megalania (me-ga-lai-nia) is one of the Creatures in ARK: Survival Evolved.

The Megalania is found in many places including the highland sands on ragnarok also caves and The Trench in the Extinction DLC, where it waits on the ceilings and walls silently, ready to pounce on prey below. As is the case with other cavern dwellers, Megalania are neutrally disposed toward other native creatures, like

Megalosaurus. They tend to hide in shadowy recesses of ceilings and walls, making them extremely difficult to spot without assistance of items like a Tek Helmet or a Shadow Steak Saute. Consuming Rare Flowers will cause them to drop from the ceiling and become aggressive. Similar to the Megalosaurus, Megalania are usually only found in limited numbers in a given cave, so while it may be common to find them in the Upper South Cave, for instance, not many live there at any given time.

The Megalania is a huge lizard resembling a Komodo Dragon. It has a stocky, low-lying build with a powerful tail and a toothy maw, drooling with venom. Despite its size, it is capable of climbing walls like a gecko to sneak up on prey and traverse difficult terrain - a useful adaptation for a massive cave-dweller like it.

This section displays the Megalania's natural colors and regions. For demonstration, the regions below are colored red over an albino Megalania. The colored squares shown underneath each region's description are the colors that the Megalania will randomly spawn with to provide an overall range of its natural color scheme. Hover your cursor over a color to display its name and ID. 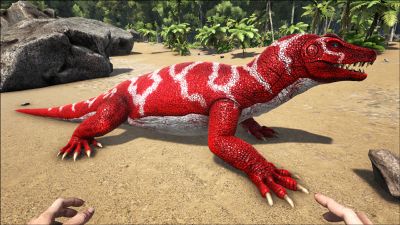 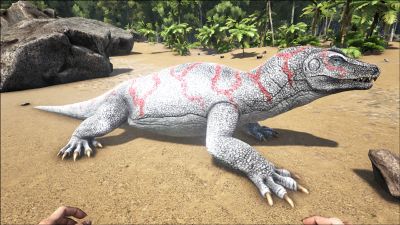 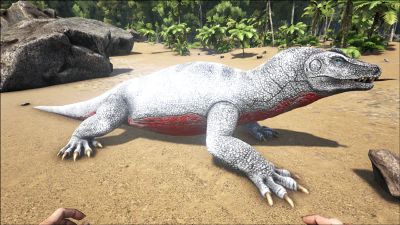 Found on the ceilings of caves, one must look up in order to find this elusive lizard. The easiest method found so far is to fire from the back of a mount and let it take the beating. While downing the Megalania is relatively easy, keeping it down is a feat. The torpor loss is extremely quick and if one is not careful they'll find their potential tame awake and angry within seconds. It eats kibble every 120 food lost.

This section describes how to fight against the Megalania.

If you can't see them in a cave, they are likely there but not visible. Terrain on walls and ceilings can completely obscure them. You can force them to come out by making them become aggressive by gaining the rage effect, either by having your survivor eat a rare flower or by using a

By so doing, you can prevent them from springing upon you when you don't expect it. You can force them down from a better distance and more likely engage the battle on your own terms.

Avoid close range weapons such as the Pike. Getting too close can make the Megalania give you rabies. Use weapons like the Crossbow or Shotgun.

The rabies effect can cause health and stamina to drop very quickly.

Used to move around easier and make exploring easier

For information pertaining specifically to the real-world Megalania, see the relevant Wikipedia article