This article is about Megapithecus, not to be confused with 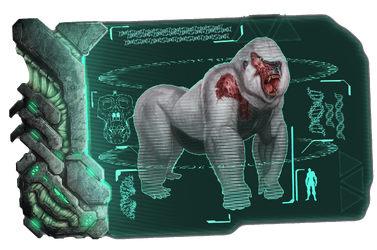 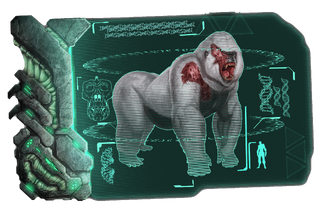 Tek
Habitat
Megapithecus Arena, The Center Arena, and Forsaken Oasis, accessible via the Obelisks and Supply Crates on The Island, The Center, and Valguero.

Megapithecus is a Boss in ARK: Survival Evolved with its lair in the freezing north. It can only be reached by generating a portal to it at a Supply Crate or Obelisk.

In Survival of the Fittest, it can be tamed and ridden, along with the

Dragon. One of its attacks allows the Megapithecus to pick up large rocks and throw them, easily breaking structures and damaging large groups of dinosaurs.

The Megapithecus highly resembles an incredibly oversized modern-day gorilla with dark silver skin and very long and thick white fur. Scars that reveal flesh and straps of tissue appear on the upper-right portion of the chest-piece, the front-facing section of the right shoulder, and most of the right side of its face. The origin of those scars remain a mystery. Its left eye is red while its right eye is blind and white.

The Megapithecus always spawns with the same color scheme and has no color regions.

This means it is currently impossible to make alterations to the Megapithecus's colors.

The Megapithecus has different types of color due to its difficulty level:

The Megapithecus can only be found in the Megapithecus Arena the The Center Arena or the Forsaken Oasis. To reach these locations, players must go to either a Supply Crate or Obelisk and place the required tribute items inside, then click on the

Generate Megapithecus Portal or the Center Portal and Forsaken Oasis items. At this point a portal will be opened to teleport nearby players and dinos into the arena.

If playing in Single Player mode, the portal can only be generated from the blue obelisk when on The Island.

A weaker variant of Megapithecus spawns at the last wave in the Gauntlet Mission "Built Fjord Tough".

This section describes how to fight against the Megapithecus.

Dragon, It dealing no special effects to the player and their tames unlike the other 2 Guardians, and it rewards far more than the Broodmother despite being weaker.

Broodmother Lysrix, defeating Megapithecus can be done quickly as long as the correct tames are brought to the battle. Megapithecus has the lowest health of the three main island Guardians, so killing it isn't very hard and can be done even quicker than killing a Broodmother. It can spawn minions in the form of

Gigantopithecus. The arena the Megapithecus on The Island lives in is a snow covered mountain temple, so bringing equipment to prevent hypothermia is necessary.

On The Island Not much strategy is required to defeat Megapithecus other than whistling and attacking, however, precautions must be made to ensure tames don't fall into the large instakill hole to the right of the starting area. To avoid this, most tribes do not leave the starting teleport pad and instead lure the Megapithecus over to it, which is much safer and prevents anything from being knocked into the hole. Its recommended to bring Fur Armor, Fria Curry, or high amounts of Fortitude on your character to prevent freezing to death as the arena itself is quite cold, finally while it most likely won't be needed, firearms should be brought just in case as a last resort.

In The Center Arena and the Forsaken Oasis players will have to watch out for the other bosses and their minions.

The large hole to the right side of the starting area in the arena can instantly kill ANYTHING. Leaving the starting area is always very risky and dangerous, ontop of that if not properly prepared for, players will likely freeze to death due to the temperature.

If dismounted then a Mesopithecus could blind the player giving enough time for other stronger enemies to potentially kill the player.

It has the lowest health of The Island bosses on all difficulties; even only having 180,000 on Gamma! This leads to much quicker kill times than other bosses.

As well as that it also has a very small variety of attacks that dont have any special effects like how the broodmothers web attacks slow players down or how the dragons fire breath attack lights players on fire, they consist of: a punch, a double arm slam attack (which in and of itself is just a different attack animation for the punch attack), and a rock throwing ability.