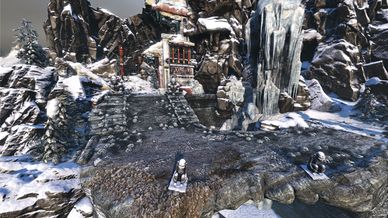 The Megapithecus Arena is an arena for fighting the

Megapithecus boss. The Megapithecus is not the only danger, however. Freezing temperatures (around -4 °F/-20 °C) also pose a hazard to survivors, so come prepared with good hypothermal protection. Fria Curry is highly recommended!

The Megapithecus Arena itself is located beneath the blue Obelisk, but you can open the portal to the arena from any Obelisk or Supply Crate unless you're playing in Single Player mode, in which case you will need to travel to the blue obelisk.