This article is about Brachiosaurus, not to be confused with 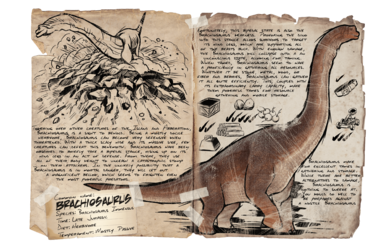 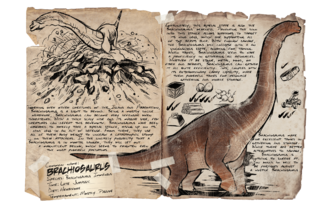 Dossier
These values may differ with what you see in-game or written elsewhere. But that is what the dossier says.
Group
Dinosaurs
Species
Brachiosaurus immensus
Time Period
Late Jurassic
Diet
Herbivore
Temperament
Mostly Passive
Variants

The Brachiosaurus (brae-kee-uh-SAW-ruhs) is one of the Creatures in ARK Additions.

The Brachiosaurus can be found roaming The Island, The Center, Ragnarok, Valguero, and Aberration. Most of the time it is Docile, though if provoked, it will quickly become defensive.

The Brachiosaurus towers over most sauropods, even standing higher than the

Titanosaur. It is covered in thick, leathery scales and has a vertical neck and a cap-shaped head. The

Aberrant variant has spots instead of stripes.

This section displays the Brachiosaurus's natural colors and regions. For demonstration, the regions below are colored red over an albino Brachiosaurus. The colored squares shown underneath each region's description are the colors that the Brachiosaurus will randomly spawn with to provide an overall range of its natural color scheme. Hover your cursor over a color to display its name and ID. 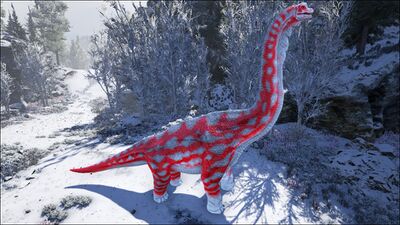 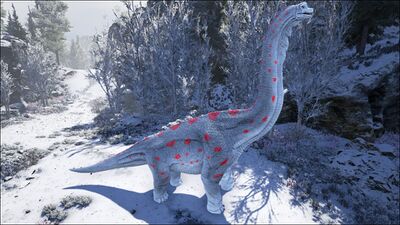 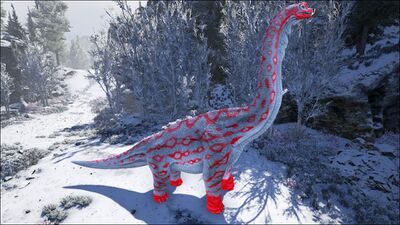 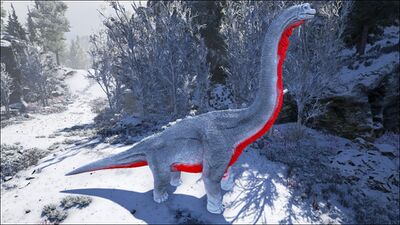 This section describes how to fight against the Brachiosaurus.

The Brachiosaurus is a dangerous Creature to fight, as it can deal large amounts of damage and has a lot of

Health. However, utilizing the right strategies, a survivor can quickly defeat a Brachiosaurus.

Pump-Action Shotgun or an

Fighting a Brachiosaurus with a rider can prove dangerous, and sometimes deadly, as the rider has control over the timing of the mega stomp and bellow. The Brachiosaurus has the ability to damage all Structures, making it a huge threat to a survivor's base. Furthermore, the Brachiosaurus's bellow can cause almost any Creature to flee, potentially putting the survivor in danger of a counterattack or an Environmental hazard.

Most of the Brachiosaurus's attacks do little

Melee Damage, and the mega stomp is not used as frequently by a wild or riderless Brachiosaurus. Its ability to take on a bipedal stance and unleash its mega stomp can take a while to occur and can prove to quickly drain a Brachiosaurus's

Stamina, allowing time for the survivor to escape. The Brachiosaurus is also a large target, making it easier for long-distance ranged attacks to hit.

Unlike most knockout tames, the Brachiosaurus cannot be knocked out through traditional strategies. Instead, the survivor must attack the Brachiosaurus's hind legs when it takes a bipedal stance. If the Brachiosaurus receives enough damage, it will fall into an unconscious state, allowing for taming. It is recommended to use a

Fabricated Sniper Rifle, as this gives the survivor better control over the shots that the Brachiosaurus takes and reduces the likelihood that it is hit after being knocked unconscious.

The following Creatures attack, defend themselves or fight back instead of running after hearing the Brachiosaurus's Fear Roar, including other Brachiosaurus:

The following Creatures ignore the Brachiosaurus's Fear Roar, including Alpha Creatures (except Alpha Raptor), Bosses, and their minions:

Harvester - The Brachiosaurus is able to harvest all Resources, making it one of the best creatures to gather with. The R key will allow the Brachiosaurus to specialize in

Berries. A Brachiosaurus with decent

Movement Speed as well as high

Siege Weapon - The Brachiosaurus is able to damage all Structures, making it invaluable for destroying enemy bases. When leveled in

Melee Damage and paired with soakers such as

Acrocanthosaurus, it becomes a force to be reckoned with.

Melee Damage when performing the mega stomp, allowing it to draw in aggressors and eliminate a vast amount of survivors and Creatures in one stomp. The attack must be used wisely though, as there is a 30 second cooldown as well as a delay before the Brachiosaurus can hit anything, making it highly vulnerable.

Intimidation - The Brachiosaurus utilizes a much stronger version of the

Yutyrannus's Fear roar which can scare off a

Giganotosaurus. This ability can be used to fend off enemies and make them much more susceptible to damage.

Fertilizer Producer - The Brachiosaurus can produce

Massive Animal Feces, which can be fed to

Dung Beetles to produce a large amount of

For information pertaining specifically to the real-world Brachiosaurus, see the relevant Wikipedia article