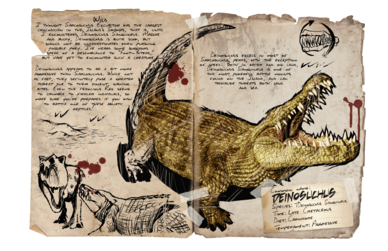 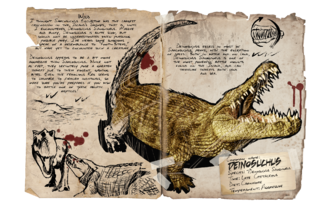 The Deinosuchus (dai-now-SOO-kiss) is a reptile in ARK Additions.

The Deinosuchus generally tends to swim around swamps, rivers, and oceans, hunting for prey.

The Deinosuchus is a large crocodilian with a resemblance to the

Sarco. However, the Deinosuchus is bulkier and its jaws are more broad.

This section displays the Deinosuchus's natural colors and regions. For demonstration, the regions below are colored red over an albino Deinosuchus. The colored squares shown underneath each region's description are the colors that the Deinosuchus will randomly spawn with to provide an overall range of its natural color scheme. Hover your cursor over a color to display its name and ID. 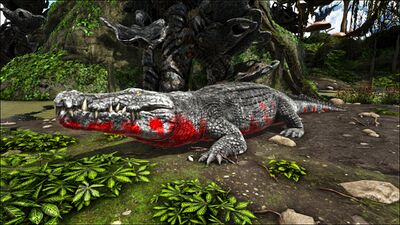 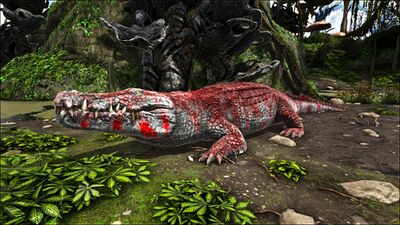 Region 3: Back and Jaw Stripes 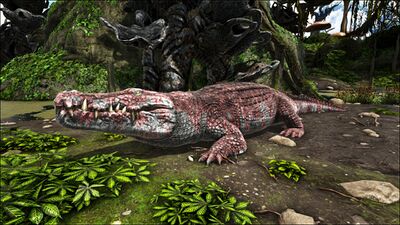 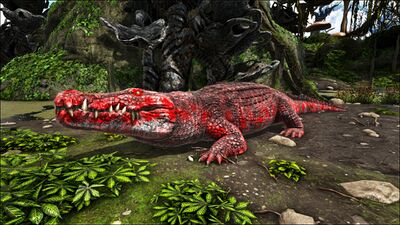 This section describes how to fight against the Deinosuchus.

The Deinosuchus can be tamed by rendering it unconscious and subsequently feeding it. Despite its high

Torpor, the stat decreases at a relatively slow rate.

For information pertaining specifically to the real-world Deinosuchus, see the relevant Wikipedia article.