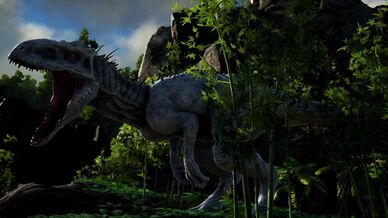 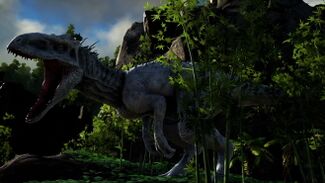 The Domination Rex (daa-muh-NEI-shn reks) or simply Dominator is one of the Creatures in ARK Additions.

The Domination Rex attacks everyone and everything when it is maturing, even the survivor who imprinted on it.

The Domination Rex is white and similar in appearance to a

Rex. However, its arms are a lot larger than those of the Rex, and sport four large claws. The Domination Rex also has the ability to camoflauge.

The /Domination Rex always spawns with the same color scheme and has no color regions.

This means it is currently impossible to make alterations to the /Domination Rex's natural spawn colors.

This section describes how to fight against the Domination Rex.

The Domination Rex cannot be found in the wild. To tame one, the survivor must engineer a

The following creatures can be instantly killed by its pin ability: