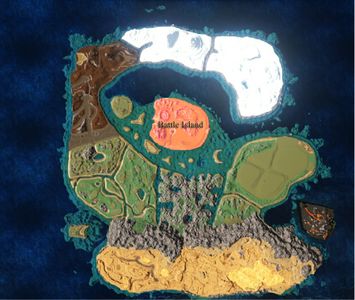 Battle Island is a dangerous island in the centre of the eastern half of Ebenus Astrum.

Battle Island is located in the centre of the Eastern section of the map, and one of the most dangerous above-ground regions in the game. Carnivores and herbivores spawn here in large numbers and are highly aggressive. A crater to the North of the island hosts a Battle Giga and a Battle Titanosaur locked in mortal combat, also found there are some of the Artifacts which are placed there as a temporary location until they are moved into one of the map's caves at a later date. The island has very little beach and the main area contains some ruins which can be used for some protection from the island's occupants.

The scarcity of bushes or rocks on the island together with the large numbers of aggressive dinos make this area a less than idealistic choice for a base location.

Silica Pearls as there are quite a few deposits around the area.

To the South round to the West of Battle Island is a chain of, small, sandy beach islands which would provide ideal, safe locations to recover

Stamina between battles on the island.

Battle Island's creatures are untameable and spawn at double the server wild dino level - except for the Dodos who spawn at level nine hundred and ten, and compys at 2.5 times. They all have triple health, double melee. and drop Astrum and EA Specimen Implants. The possible spawns are:

They are detailed in Assets/Blueprints/Battledinos.

Some of the creatures from Extinction can be found here:

There are three caves found on battle Island, all the entrances to the caves are accessible on foot. To use tamed creatures inside the caves, a

*In the crater containing the Battle Giga and Battle Titanosaur you can find some of the Artifacts which are stored temporarily until they are moved to a location in one of the caves.

*Using the high grounds to your advantage can help with defeating the creatures on the island.

*The area around the ruins is where the majority of the creatures can be found.

*Battle Island is a great place to level dinos and yourself, provided you have the correct equipment.