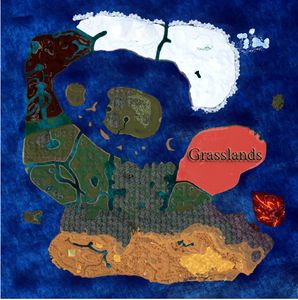 Grasslands is an island to the East of Mod:Ebenus Astrum/Battle Island of the Map Ebenus Astrum.

Grasslands is an island in the East of the current Map Ebenus Astrum. Most of the island has a, wooded, belt round the coast and beaches where herbivores and occasional small carnivores spawn. The belt contains the required resources for base building for the survivor who likes to lead an exciting life.

Once through the outer belt, the landscape opens up to a large, open, plain covered in tall grass full of large packs of

raptors, inspired by the scenes from Isla Sorna in The Lost World: Jurassic Park™ this makes the island a very dangerous place to visit.

The Yellow Obelisk can be found on the island. As can the

There are no caves, currently, on Grasslands however there is, at least, one cave being worked on.