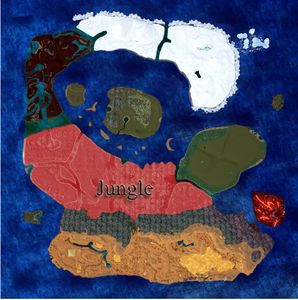 The Jungle is the dense forest area of Map Ebenus Astrum.

The Jungle consists of thick forests and is divided by five rivers. Stretching Southeast from the West, the area contains several lakes and islands. In the west the green Obelisk is located. The area contains bountiful resources and creatures. To the Southwest of the region the Waterfall Cave is located. The area, also, contains the Jungle Pyramid. The pyramid resides in a pit, it is difficult to find and virtually impossible to climb out of without use of

Climbing Pick. Access to the Jungle Pyramid can also be gained using one of the Fliers.

The Jungle area is good for base building as it has, plentiful, resources and, easy, access to food and water.

There is an Island to the Southwest called Crab Island which could, also, be classified as part of the jungle.

To the Northwest of the Jungle is a, small, swamp and RedWood, to the North is water with a chain of small isles and Battle Island, to the East is Grasslands and to the South is a range of mountains bordering The Desert.

Jungle's creatures are diverse and plentiful. The possible spawns are:

To the Southwest of the region the Waterfall Cave is located which is accessible on foot. To use tamed creatures inside the caves, a 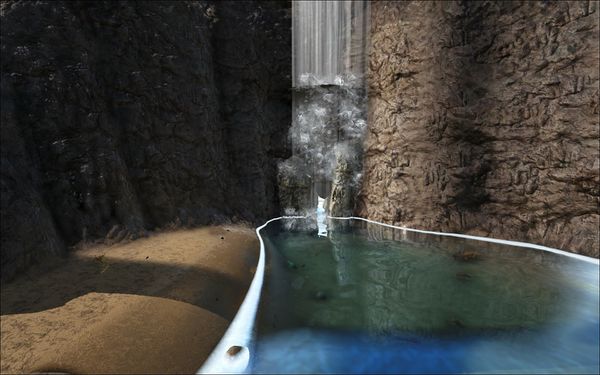 *The area has some of the easier areas to spawn in but still can be very hazardous.