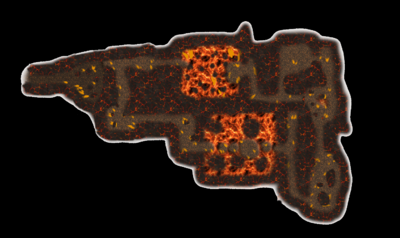 The Lava Cave is a cave on Volcano Island, in the eastern part of the map Ebenus Astrum. The cave hosts the

Artifact of the Brute needed to summon

This cave comprises lava pathways, walls and ceilings with stalagmites and stalactites. There are large red crystals in the cave shedding some light, although a

Torch and/or Light Pet would be a handy addition.

The cave contains many

Onyc, and some high level

Pulmonoscorpius so be prepared for a battle.

The cave has no mineable resources whatsoever.

* The entrance to the cave and the passage to the artifact is accessible on foot. The path through the cave requires a

Grappling Hook and jumping skills to traverse the lava lake, found on the way to the artifact. Taking a

Climbing Pick and a

Zip-Line Anchor with you would also be worth while, specially if you wish to tame one of the high level

Ravager while there and bring it out with you, of course you will need some method of tranquilizing the beast and maybe some

Kibble for the perfect tame.