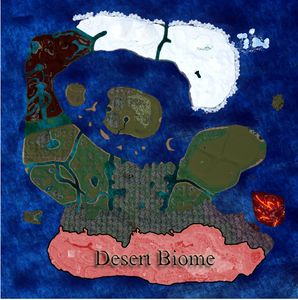 The Desert is the Desert Biome area of Ebenus Astrum.

The Desert is a large area found in the Southeastern part of the map. Stretching Westwards it contains bountiful resources and creatures. It is in the far southern region of this area that most of the Corrupted Creatures of Extinction can be found. To the West of the region a pyramid can be discovered, this is the location of the Desert Pyramid Cave which is, currently, under construction and will be released at a future date. Toward the East of the region is a giant dust-bowl area which houses Deathworms and Alpha Deathworms together with one of the Orbital Supply Drop (Extinction) / Element Node (Extinction). This OSD only spawns blue or yellow difficulty.

Dotted around the desert are Oil and Water Veins, which can be used to produce

Water, respectively. Geysers can also be found around the area.

The East, West and South of the Desert Biome is all water and to the North is a range of mountains.

Desert Biome's creatures are diverse and plentiful. The possible spawns are:

There are no caves found in The Desert. There are still some caves under construction, for example the Desert Pyramid Cave, these will be added when completed.

*Desert Biome is a great area to find

*Be wary of the heat in the desert, it will, rapidly drain your

*Water can be obtained from other sources, such as

*Heat stroke is a potential side effect of too much heat exposure, having a similar effect to being