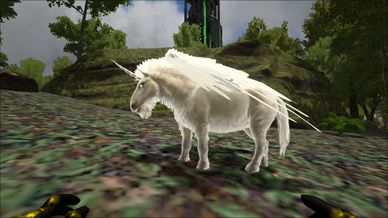 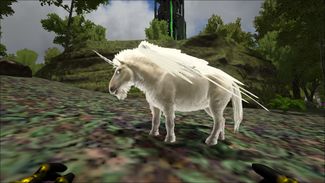 The Legendary Pegasus is a creature in the mod Primal Fear. It can be found in the wild on maps where

Aberrant Equus spawn and tamed by knock-out. The Legendary Pegasus is a flying creature with the characteristics of the Equus.

The creature has a unique feature; a "Kill Count" is shown in the lower left of the screen and after 250 kills, the Legendary Pegasus can evolve into either a Divine Pegasus by putting one

, obtained from killing a Celestial Creature, in its inventory, riding it and obtaining one more kill, or evolve into a Fallen Pegasus the same way but using a

, obtained from killing a Demonic Creature instead.

The Legendary Pegasus is a very versatile mount; it works as a normal Equus, including the

Equus Saddle capabilities, it can fly and additionally it is extremely useful for mining resources.

Engrams, which gives an Armor value of 300 and the option to wield a

Note: The lasso function is not working as of the latest version of Primal Fear.