The Chasm is a free Map for ARK: Survival Evolved.

The Chasm was released on April 5th, 2019 on the Steam Workshop.

Nearly any creature can be brought to this ark except for Flyers, Titans and Managarmr. Engrams from Scorched Earth, Aberration and Extinction are enabled.

Waking up on The Chasm you will find yourself in an abandoned and destroyed ARK. This ARK suffered a fate similar to Aberration. The past survivors on "The Chasm" pulled back their structures and cities into the Fertile Caverns and narrower cave systems to stand a better chance at defending themselves from the dangerous creatures and the hostile enviroment. Skilled Survivors may be able to still find some of the old ruins in the caverns of the map which they left before they went into hiding due to weird circumstances..

There is a huge chasm dividing nearly the entire map, as if the ARK had almost been torn apart, bringing a new challenge for survivors to face. It once seemed to have been a very lively ARK and populated by a variety of life forms. Some of them mutated strongly to adapt to the new living conditions. Others found new habitats, to which they had to adapt only slightly.

The Chasm contains the following creatures from Aberration:

In addition to the Aberration creatures, the following creatures also spawn on the map: (More creatures will be added over time) 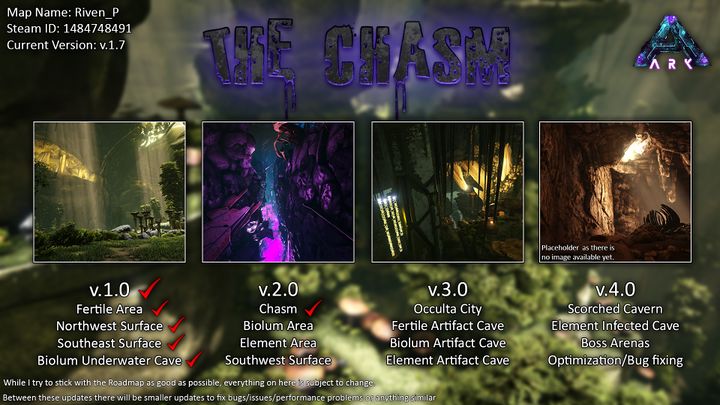