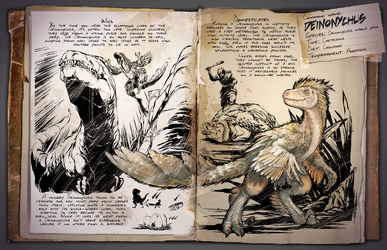 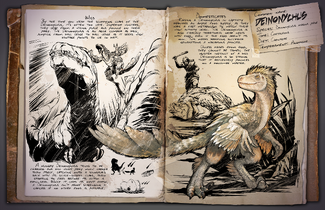 The Aberrant Deinonychus is one of the Creatures in The Chasm.

The Aberrant Deinonychus is fiercely territorial in the wild. They will protect their nests against any who dare to trespass.

The Aberrant Deinonychus has a similar appearance to the

Raptor, but has the feathers of a

Rock Drake. The Aberrant Deinonychus has razor sharp claws useful for climbing and attack. It glows at night.

This section describes how to fight against the Deinonychus.

The best way to take down a Deinonychus is to use a long ranged weapon such as a crossbow or rifle. If you bring a large mount, beware that they can latch onto it, therefore using large creatures such as

Mammoth, is a weakness. If you don’t have a ranged weapon and they latch on to your mount, you’ll need to either use a melee weapon in which case, you need to be careful because you can hurt your tame, or you can wait for the Deinonychus to run out of stamina which is not the best idea. If you are stealing eggs, then you definitely need to be prepared with a good mount because there is most likely going to be a pack of Deinonychus. It’s suggested to use a flyer so you’ll be safe. Make sure to steal the egg and then QUICKLY escape because the Deinonychus can pounce on you which can pose a great threat as it gives time for the rest of the pack to arrive. Also, do remember they have a bleed effect on whatever they leap onto because they can cause you to lose up to 1.6-1.7% of your health every second, but that is not very accurate because the damage margin depends on the amount of bites it hits you with, and how long it stays on you. So if it has high stamina, chances are it will hit you a lot of times causing the bleeding effect to be extremely effective and brutal. They also have the ability to climb, but its not nearly as good as the Thylacoleo or the Rock Drake so if you have a decent climber like those two then you shouldn't worry about it. But a decent flyer is your best bet when it comes to escaping.

It is able to latch onto large creatures such as a

Brontosaurus, making them hard to hit via conventional means. To make it even more dangerous, they are able to glide upwards to latch onto a nearby ledge similar to the

Rock Drake, and pounce and attack much like the

Raptor (It can't dismount you though). They also cause a bleed effect that stacks and makes them even more dangerous.

While latched onto a large Creature, it can mostly only attack the said creature until it releases itself out, making it extremely vulnerable to any attacks from other Creatures or ranged weapons.

The Deinonychus is weak on knockbacks like raptors. Using a Trike with a decent amount of HP can easilly kill a pack or two at once. While latched they can still get hit by attacks from the one they are riding

A wild Deinonychus cannot be tamed due to its wild nature of killing survivors through its natural instinct. Similar to the

Deinonychus Egg must be stolen from a nest or bred, and hatched to obtain a tamed Deinonychus. Similar to the Wyvern and Rock Drake, a typical player would need to be cautious as Deinonychus are territorial, and are not welcome to survivors, especially not the ones stealing their eggs.

The incubation temperature is between 176 and 194 degrees fahrenheit , or 80 to 90 degrees celsius.

The following creatures can be latched on to by the Deinonychus:

They can be seen with the Gnashed icon near them.

The following creatures can get pinned down by Deinonychus:

Climber - Using its sickle-shaped claws, the Deinonychus can climb most surfaces, making it a versatile mount. Remember that its not as great as the Rock Drake, and can easily fall off whatever it is climbing, so be careful.

Titans, a group of Deinonychus can easily latch onto a giant creature, dealing damage while hindering their movement.

Hunting/Battle Pack - In a pack of 3 or more, the pack leader will receive a pack bonus. Moreover, the pack leader can temporarily vocalize to trigger a 45 second pack buff for all other Deinonychus (level

Health to all Deinonychus, and

Health to the one ridden).