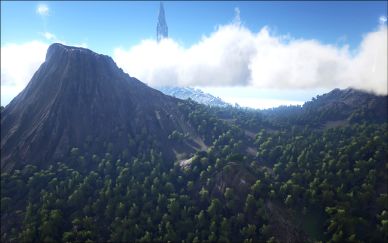 Located northern of The Redwood Forests The Grand Hills are surrounded by the three tall mountains Whitesky Peak, The Frozen Fang and The Frozen Tooth and itself contains the largest mountain on the Island: the Volcano. To the east of the Volcano lies the Central Cave.

The caldera (crater) of the Volcano contains a huge volume of stone and metal yielding rocks, with large crystal formations near the single entrance. Obsidian-bearing rocks can be found scattered along the upper sections of the trail leading up the mountain, as well as a few addition metal seams. Small, red, berry and fiber-yielding shrubs can also be found along the trail, but not in the caldera. There are also no trees in the caldera, and no more than five along the trail's length. However, there are extensive forests at lower altitudes in The Grand Hills.