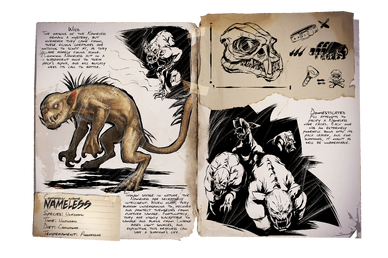 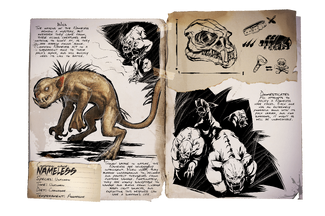 Dossier
These values may differ with what you see in-game or written elsewhere. But that is what the dossier says.
Groups
Fantasy Creatures, Mammals
Time
Unknown
Diet
Carnivore
Temperament
Aggressive
Release Versions

None
Carryable By
Can Damage 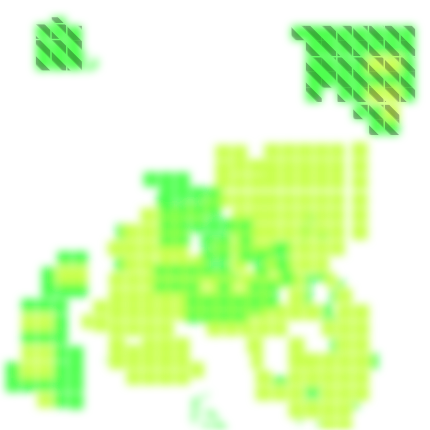 The Nameless or Chupacabra is one of the Creatures in ARK: Survival Evolved's Aberration expansion.

Aggressive by nature, Nameless are always seeking out prey, mainly survivors. In the absence of Charge Light for any length of time, they will emerge from anywhere within bio luminescence (blue) and element (red) region, and will start attacking without warning, giving chase until the said survivor either finds charged light for prolonged duration, or is very far from them/ at a point where they will lose interest (they will not stop at most of the time).

Resembles that of a hairless goblin/Chupacabra with a disfigured/hunched posture.

This section displays the Nameless's natural colors and regions. For demonstration, the regions below are colored red over an albino Nameless. The colored squares shown underneath each region's description are the colors that the Nameless will randomly spawn with to provide an overall range of its natural color scheme. Hover your cursor over a color to display its name and ID.

If Nameless start attacking you, and you don't have a lantern pet with you, You should probably head to a Charge Node or Glowbug to weaken them, making it easier to fend them off.

Utilize weapons such as shotguns while mounted on a tank-grown mount will make quick work of them.

Charge Lantern, even when deployed, disrupts their health regeneration as they are weak towards Charge Light.

Rock Drake and will seek after them in the absence of charge light should the player be on the dino.

Nameless are also able to emerge from foundations inside a base, including those placed on the back of a platform saddle. It is advised to keep a lantern pet on at all times inside a base, whether on the ground or on a tame.

Nameless prioritize attacking players and tamed dino over anything else, ignoring wildlife even if they attack them. In the absence of an alpha, a random Nameless can shift into their alpha state with red veins (usually only one can exist around at any point of time), attracting other nameless to join in its conquest. If left alive for too long, there is a chance it will call the

Subterranean Reaper King out, as denoted by the constant black circle pushing away from itself with a black mist-like geyser.

If not killed in time when it does call, the Reaper king will emerge out from anywhere within instead of another nameless, making the encounter harder.

Nameless are rendered weak against

Charge Lantern or in presence of Charge Light, reducing the effectiveness of health regeneration.

The Basilisk is very effective when fighting Nameless, as their poison attacks aren't resisted by Nameless armor.

Nameless hates Fertile land (green region), and will rather scurry underground. Useful if you want to make a quick get away.

Nameless are relatively slow, so escaping it is easy.

Nameless Venom: The Nameless is rather trivial in its resources that can be harvested from its body except for its valuable

Nameless Venom. This venom, though toxic to consume, is readily eaten by the

Rock Drake. Baby Drakes require this venom in order to mature, and adult Drakes gain 100 Health when consuming it.

Due to their mechanic of being burrowed under the ground at any time - even with active charge light - searching for a nameless is easier at spots that have not been cleared for some time. Once a nameless is found, letting it transform into it's alpha state spawns new nameless around the player to kill and farm for

Nameless Venom. Make sure to keep one of them alive while you are looking for venom.

Swarm Tactics/Trolling: Nameless are not tamable, but thanks to the large amount of Nameless that can congregate when a survivor lacks a charge light source, one can easily attract a large group of them and lead them elsewhere, so long as it does not cross the Green Fertile Region as they will refuse to follow in that region. When a large enough group of about 10 come together, the Alpha Nameless will call for a

Reaper, specifically a Subterranean Reaper King, to join in the group in a fight. This deadly combination of fierce creatures can be used to your benefit, either as a distraction and/or thwarting tactic in order to escape an enemy, luring an army of them to attack an enemy(so long as there is not charge light around), or simply to annoy or troll a survivor, their tames, or their base.