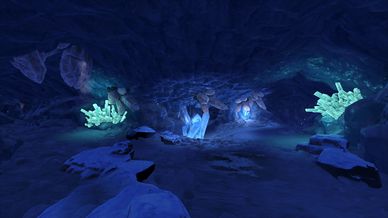 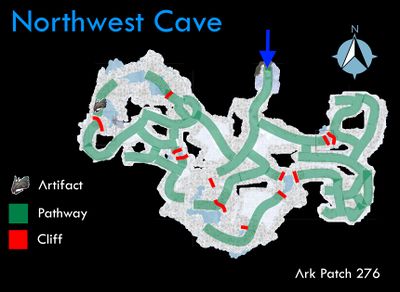 The North West Cave is a cave in the northwest of The Island. It contains the

Artifact of the Skylord, needed to summon the

Dragon. Its entrance barely fits players on foot (mounts are too large to enter the cave organically). The inner tunnels are extremely narrow, often requiring crouching to explore. Watch your feet and take it very slow, as there are pitfalls that deal 5000 instant damage - even if you descend with a grappling hook. If you fall into these pits, retrieval of your gear is only possible by grappling your body out of the pit. Your body may fall through the world if you die to the pits, making it impossible to retrieve your gear without cheats.

After the update, this cave contains very little loot, excluding the artifact.

Creatures in the cave include Araneo and Onyc and spawn at normal levels.