This article is about Pachy, not to be confused with 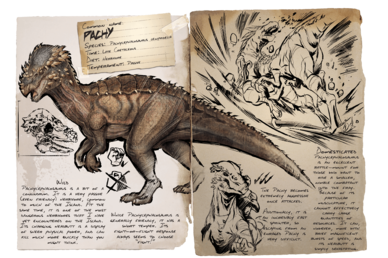 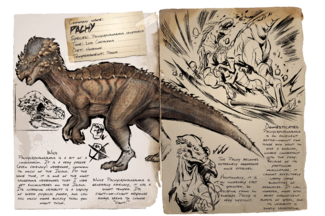 Dossier
These values may differ with what you see in-game or written elsewhere. But that is what the dossier says.
Group
Dinosaurs
Species
Pachycephalosaurus leniproelia
Time Period
Late Cretaceous
Diet
Herbivore
Temperament
Passive
Release Versions

The Pachycephalosaurus(pak-ee-SEF-uh-lo-SAWR-us), or simply Pachy, is one of the dinosaurs in ARK: Survival Evolved.

The Pachy is passive unless provoked. They are rather slow when moving normally, but move very quickly when using their charge attack.

Standing at a man's shoulder height, this bipedal dinosaur possesses a thick bony dome on the skull for charging into enemies and structures, an "S"-shaped muscular neck, and a beak for browsing vegetation, along with short arms weilding grasping hands, a bulky body and legs, and armor on the top of the back and tail.

This section displays the Pachy's natural colors and regions. For demonstration, the regions below are colored red over an albino Pachy. The colored squares shown underneath each region's description are the colors that the Pachy will randomly spawn with to provide an overall range of its natural color scheme. Hover your cursor over a color to display its name and ID. 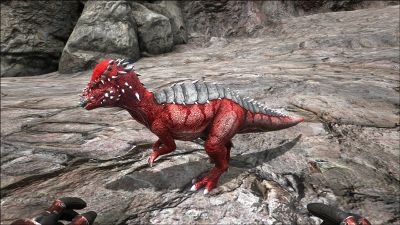 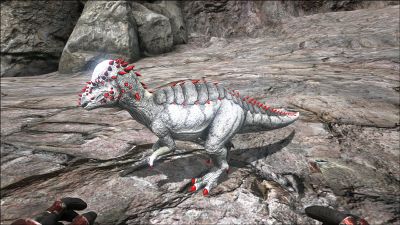 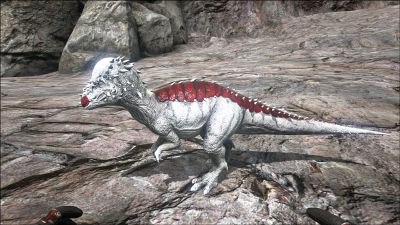 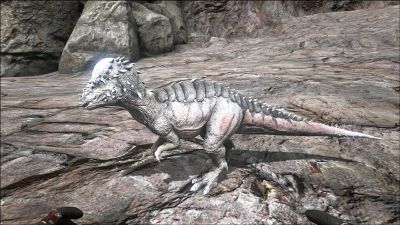 While the Pachy does not have a lot of Torpor, attacks on the head are nearly useless due to the headplate. If possible attacks should be focused on the body rather than the head. Thus having Pachy charge at you is a very dangerous situation. Luckily it is vulnerable to the Bola, making stopping it and flanking it with a Wooden Club easy.

This section describes how to fight against the Pachy.

The head of the Pachy reduces incoming damage by 87.5% and the rest of the body takes only normal damage. It is advised to kill or down(for taming) a Pachy before it closes distance with arrows or gunfire.

Perching upon a stone whilst shooting at it with a bow/gun is a valid strategy, however, Pachys are commonly found in places where carnivores live. Therefore, climbing onto the rock might be dangerous. Once the Pachy reaches the player, it will headbutt the player relentlessly. During this process, it is difficult for the player to not hit the bony helmet on the Pachy's head, which causes a problem when fighting back.

Long ranged weapons and potentially a Pike can do the trick, as melee battles will subject the player to damage. A powerful mount can almost effortlessly kill a Pachy with a couple, or in some instances, a single chomp.

The Pachy lowers their head in front of their body when attacking, giving themselves a damage-reducing shield. The attacks of the Pachy raise the target's torpor, potentially knocking it unconscious. Attempt to take care of the Pachy before the battle becomes physical, as many players, especially those of lower levels will be unprepared. Always keep an eye out for other Pachys in the area, or more dangerous animals. A casual Pachy-taming adventure can turn into a bloodbath if the players fail to stop a Carno or Rex from entering unnoticed. There is not much that can be done once larger predators arrive, only massive loss of life between helpful players and beloved animals.

Use a Bola on it and move to the creature's side or back. From there, start stabbing with Spears or a Pike. If you attack with Spears, make sure to have about 5 on you, as they have a chance of breaking.

Alternatively, the Pachy has relatively little health. Try to override the damage output by a volley of arrows or bullets, or a powerful mount. If you ride a Beelzebufo into battle, use its tongue to knock it out and then simply kill it or tame it.

For information pertaining specifically to the real-world Pachy, see the relevant Wikipedia article