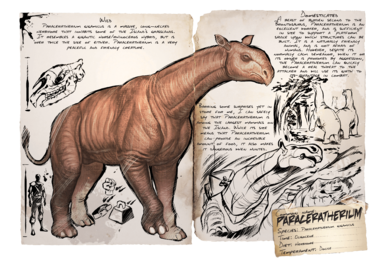 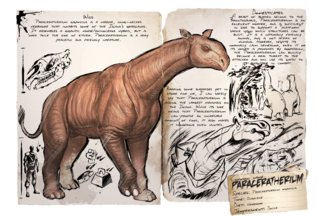 Dossier
These values may differ with what you see in-game or written elsewhere. But that is what the dossier says.
Group
Mammals
Species
Paraceratherium gigamicus
Time Period
Oligocene
Diet
Herbivore
Temperament
Docile
Release Versions

This article is about Paraceratherium, not to be confused with

Paraceratherium, due to a lack of natural enemies because of its sheer size, is naturally docile. It will ignore humans and other creatures so long as not provoked. Once it is attacked, the animal quickly becomes dangerous. Again, because of its size and immense weight, the Paracer is an extremely deadly adversary so proceed with caution. Luckily, Paracer are solitary creatures living alone or in small family groups. They will protect their fellow herd members if necessary. Don't be fooled by its large size and seemingly docile temperament,the Paracer is an incredibly fast and strong creature when it wants to be. With high health and quick movement, this quick horse-like creature can be slow to take down, and can dish out devastating attacks to survivors and smaller Dino's.

Because of their need for copious amounts of nourishment and physical size, Paracer tend to roam the edge of forests and valleys in the lower altitudes. Avoiding dense forests if possible.

Paraceratherium is a large terrestrial mammal estimated to weigh between 15-20 tons (33,000 to 44,000 lbs) when fully grown. Standing approximately 16 feet at the withers and 24 feet in length. Paracer's build is rather stocky with long, robust legs to support the animal's immense size. A long thick neck, upwards of 4–5 feet long, allows the animal to easily graze high vegetation. Paracer's hide is extremely thick and hairless. Excess skin folds onto itself similar to modern day Rhinos. Hide color ranges from brown to grey. Small eyes and ears allow limited vision/hearing that is overcompensated by an excellent sense of smell. 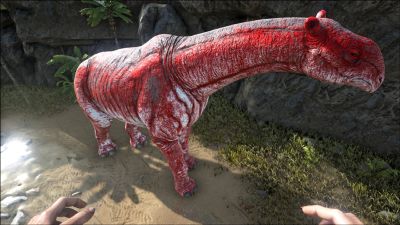 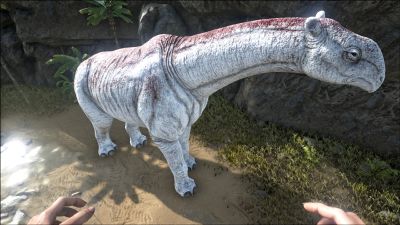 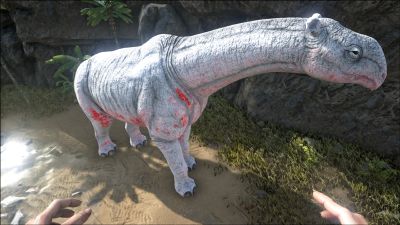 A rather standard tame, use the crossbow with tranq arrows leaving a few seconds between each shot. It tends to have pretty high torpor and can move fast for an animal of its size, either kite it around or have a friend hover you above with a flyer and aim for the head for a quicker KO. They can also be Snagged on bigger Destructible rocks, and shot at from the other side, as they are not quite as capable of maneuvering over them, but are tall enough to hit the head or neck. It is also easy to kite the paracer around a stone Dinosaur Gate.

This section describes how to fight against the Paraceratherium.

The Paracer is one of the largest herbivores and has slightly more health than a Rex and high damage. They tend to spawn in groups of 2 or more.

Despite the Paracer's strength, it is slower than a player and its large size means it can be stuck behind boulders, but it will destroy any trees blocking its path. It can also be kited to a cliff where you can shoot it safely. When using a reasonably fast mount attacking its back feet is a good way to kill it fast and take minimal damage in the process.

A decent ranged weapon such as a crossbow or a Longneck Rifle is effective at killing the Paracer before it can reach you. A decent dino can kill a single Paracer without problems, but a group can deal a large amount of damage quickly to the dino.

The Paracer usually spawns in small groups and can overwhelm an unprepared target. Its attacks have a wide range and even when escaping its stomp attack can be powerful to small creatures such as Raptors.

Its large size means it can get stuck easily, and it will run away once it has taken sufficient damage, giving a large window to attack.

Also, unlike other creatures, the AoE of this creature also hits wild creatures, making them attack depending on their temperament. You can utilize this to kill huge groups of Paracers. Then, quickly harvest the corpse.

For information pertaining specifically to the real-world Paraceratherium, see the relevant Wikipedia article