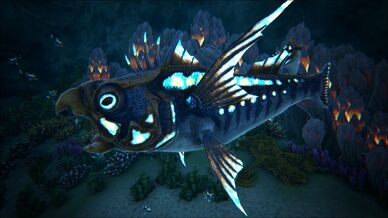 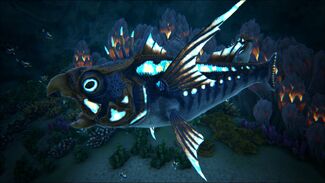 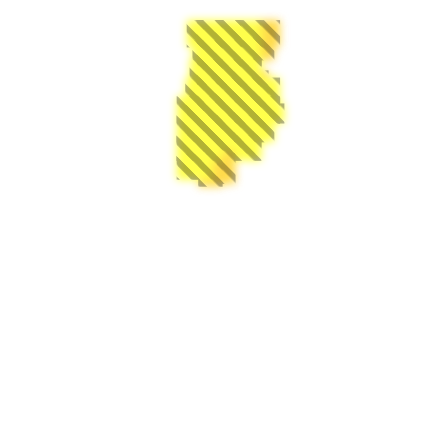 The Parakeet Fish School is a Creature in ARK: Survival Evolved's Expansion Pack Genesis: Part 1 that can be found in the ocean biome.

Normally Parakeet Fish Schools will wander slowly around the deeper areas of the Ocean biome.

However when approached they will target the player and attack. The player will receive a message at the top of their screen that they have been 'Targeted by Microbes'.

They will often target nearby wooden structure (but deals no damage), and several wild creatures if approached, such as

Despite being a single entity, Parakeet Fish Schools appear as a school of small fish swimming around each other, blue in color with glowing fins.

The Parakeet Fish School always spawns with the same color scheme and has no color regions.

This means it is currently impossible to make alterations to the Parakeet Fish School's colors.

This section describes how to fight against the Parakeet Fish School.

The swarm is similar to the one in bog,but does about ten times more damage. Basic swim speed is just enough to outrun it and will lose interest if you swim far enough.

The Parakeet Fish School does a respectable amount of damage at 20 damage per attack, regardless of armor. Try to burst them down or do hit and run tactics by swimming through them with bites until they're dead.

Anything melee, but it's not recommended to fight it without a mount.

They deal a high amount of fixed damage, killing players with relative haste. They can also kill unattended tames if they're on passive. Lastly, they have a respectable health pool which makes them hard to kill.

The Parakeet Fish School travels rather slowly and can only easily damage stationary players and tames. Swimming through them with tames or a pike can normally keep them away from targeting you much. They also don't target boats anymore though the presence of Leedsichthys dissuades the use of those in the ocean biome.

While they cannot be tamed Parakeet Fish can be lured to Passive Tame Megachelon.