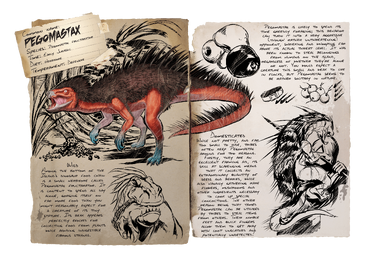 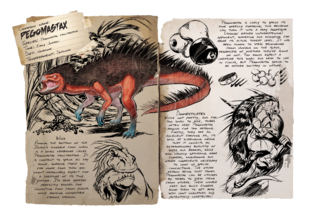 Dossier
These values may differ with what you see in-game or written elsewhere. But that is what the dossier says.
Group
Dinosaurs
Species
Pegomastax fructarator
Time Period
Early Jurassic
Diet
Herbivore
Temperament
Defensive
Release Versions 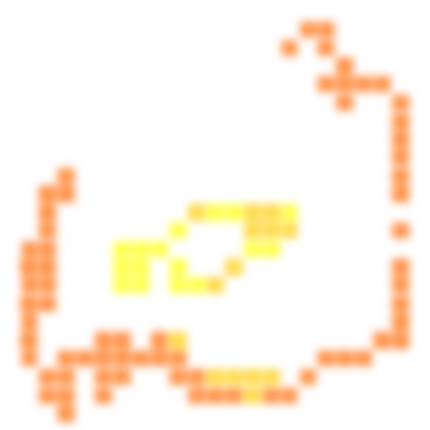 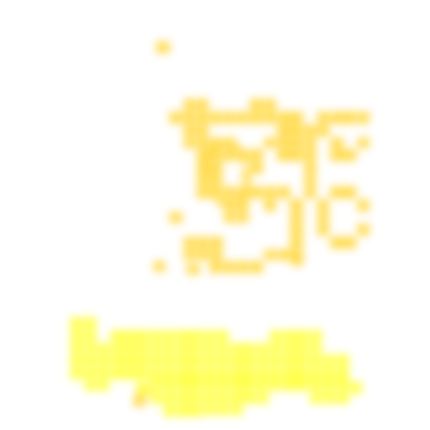 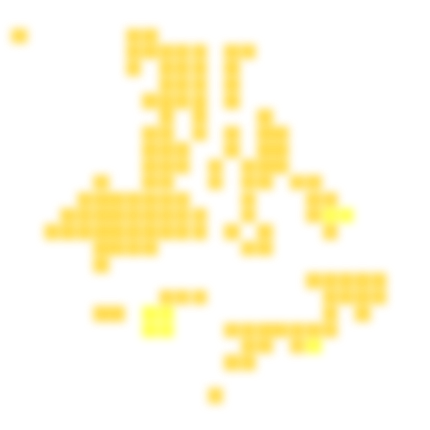 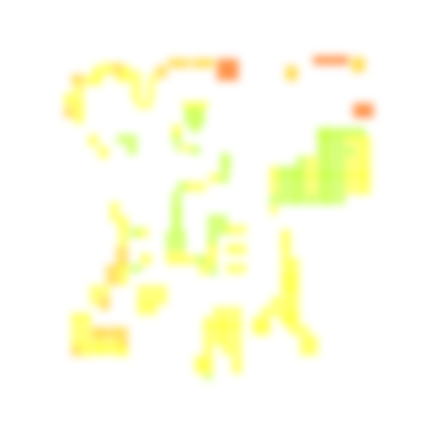 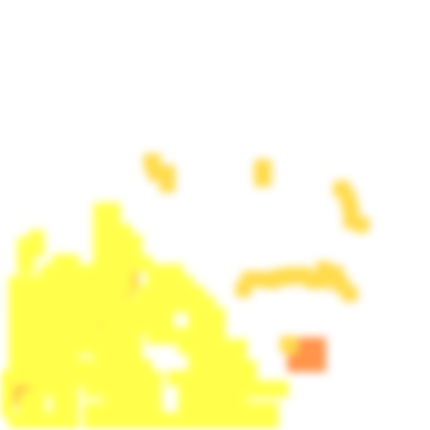 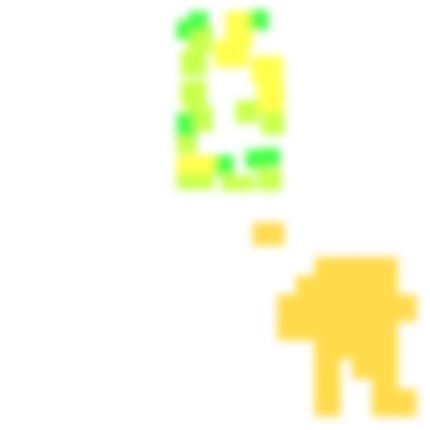 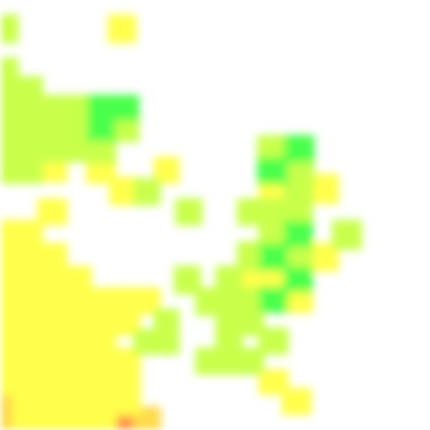 The Pegomastax (peg-o-mas-taks) is one of the Creatures in ARK: Survival Evolved.

The Pegomastax is a small herbivorous biped with several avian features. First is its beak, which grants the creature a strong bite to crush nuts and fruits. The beak also has small boar-like tusks in it, serving as a tool for harming attackers, humans or dinosaurs. Second is the feathers that cover its back. Unlike those of birds, they are stiff and stand straight like porcupine's quills, though nowhere near as dangerous.

This section displays the Pegomastax's natural colors and regions. For demonstration, the regions below are colored red over an albino Pegomastax. The colored squares shown underneath each region's description are the colors that the Pegomastax will randomly spawn with to provide an overall range of its natural color scheme. Hover your cursor over a color to display its name and ID.

The Pegomastax has a unique variation to the Passive Taming mechanic - rather than pressing E to feed an item to the creature, you must allow it to Pickpocket the item from you. This deals a minor amount of damage, after which the Pego will run away and there is a delay before it can be "fed" again. It will prioritise the item held in your last inventory slot, but will move on to steal other random items if your last inventory slot is empty - food items stolen from other slots or your inventory will still count toward the tame. If you have no items - it will become conventionally aggressive. Note that Pickpocketing will steal the entire stack, not just an individual item.

Items that the Pegomastax steals can only be reprised from its corpse or its inventory (tamed or knocked out), with the exception of valid taming foods (i.e. those listed in the table below as well as all types of Kibble) that will be lost.

The amount of consumables in a stack appears to improve taming time, but this is not a 1:1 ratio with the below table (Tested: A level 25 took 4 stacks of 100 mejoberries to tame).

Taming Effectiveness is always 100% (i.e. +50% bonus levels) unless damaged, although damaging a passive tame will reset all Taming Affinity (Progress).

Put mejoberries in stacks of 20 in your inventory, only carry berries let him steal a stack at a time, he will lose a little taming before returning to steal again, a small 1 x 1 box works well to keep him from running away too far after stealing each time. If you encounter problems with dropping tame despite continued stealing, try a larger box and giving the Pegomastax more room.

In rare cases a Pegomastax is also tamed directly when hitting them with the primary attack of a dino the first time a Pegomastax attacks.

This section describes how to fight against the Pegomastax.

Pegomastax will attack you on sight and once within range will attempt to rob you of a random item!

Chase down and stab, shoot, set on fire, or even eat the poor creature to reclaim what it stole!

Almost any weapon will suffice, although ranged weapons are more viable (Unless stolen!)

The only real danger from this tiny monster is that it may rob you of a critical item while you are in combat.

Pegomastax have low health pools and are fast but not faster than most players.

The Pegomastax steals things from another player's inventory. What it steals depends on what is carried by the survivor, particularly in their inventory slots. This can prove useful; for example acquiring a higher grade weapon perhaps to turn the tide on an enemy.

For information pertaining specifically to the real-world Pegomastax, see the relevant Wikipedia article.