Procedurally Generated Maps were introduced in 248.0. This feature allows players to let the game generate a random map, based on parameters or a seed.

NOTE: Unfortunately Wildcard never supported the mode past release so do beware of bugs and be prepared for crashes when you attempt to generate a map.

Other important key things to note are there are no options to choose which creatures you do and don’t want in the maps you create, no Obelisk or Bosses(even in the pre-existing custom maps), and when trying to make your map there is no mini map in the generation options screen to show what you're changing so making your map can be very difficult, so it's abilities are very limited due to the lack of support from Wildcard post-launch

Warning: It is highly recommended to set down the dino count multiplier, because of over spawn!

The seed is the base of a procedurally generated ARK. Each seed will create an ARK which can be remade by using the same seed (and other settings). This way players can share their favorite maps with the world. Seeds can only be up to three digit numbers. Non-numerical seeds default to zero, as do seeds larger than 999.

The size of the land area of your ARK. If this value is too high it won't have much water between the border of the map and the land of your ARK. At the maximum value, 50, there will be no ocean biome in your ARK.

The higher this number, the more mountains you have. Setting this too high can create impassable terrain.

The Mountain Slope setting will change the steepness of a mountain. A lower number will generate steeper mountains that are harder to walk on than mountains generated by a higher number. This number only goes from 0 to 2.

This setting determines 'noise', how often the random factors of the map are considered, such as trees and resource placements. The default setting is 0.0125, and the maximum is 1. The higher this value is, the more random your map becomes.

How hard the transition is from ocean floor to the shore is. Ranges from 0 to 2. 0 gives you sheer drops from the water level to the ocean floor.

The Water Level is the height of the oceans, rivers and lakes in your generated ARK. Using a value lower than 0 is recommended, values higher than ``0`` make the player spawn points in the water.

Grassland Grass Density is the harvest objects found in the biome. Examples being plants, rocks, metal, and so on. Increasing the number increases the harvest items.

This setting will set the floor of the deepest oceans in your ARK. Making the Ocean Floor Level higher than the Water Level can end up with a world containing extremely steep slopes and no beaches. The water is now purely aesthetic and the seafloor can be walked on as if it is dry land. There is only one spawnpoint. All the others show up in the very corner of the map and the game will put you at the only real spawnpoint if a blank one is selected. Actual water will be a threshold above "new ground level" but invisible, so extreme caution should be taken.

Erosion is the smoothness of your ark. To create nice smooth hills a higher number is recommended. Using 0 will make the game unplayable because of unclimbable hills and getting stuck at spawn points.

Changing this value causes the map to be generated as normal, but then zoomed in or out after generation.

If the value is high, the ground turns into spikes, which gets you and your creatures stuck.

How flat the land has to be before trees spawn. 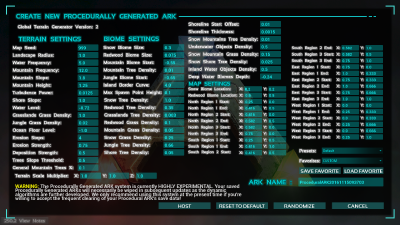