Difference between revisions of "Reaper" 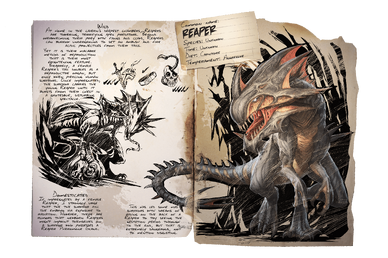 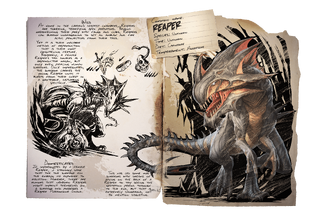 Dossier
These values may differ with what you see in-game or written elsewhere. But that is what the dossier says.
Group
Fantasy Creatures
Species
Unknown
Time
Unknown
Diet
Carnivore
Temperament
Aggressive
Release Versions

1 Adults cannot be tamed, but babies can be 'birthed' from players being impregnated from queen and imprinted on.
3 The only way of 'breeding' would be through impregnation from the Queen, but breeding technically isn't possible due to the gender mechanics of the Reaper. 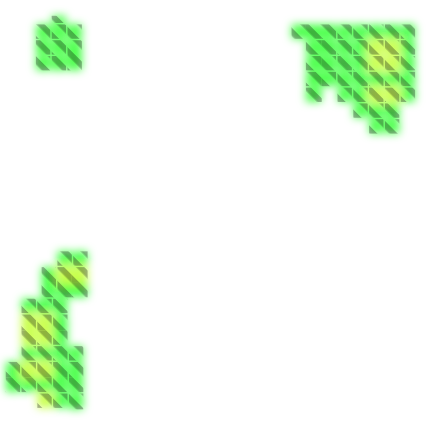 The Reaper is one of the Creatures in the Aberration-DLC of ARK: Survival Evolved.

The Reaper is highly aggressive, but only emerges when the Alpha

Nameless calls for them often. Be prepared for their arrival if you prolong the battle against the Nameless for too long. (The Reaper will only spawn after you have accumulated 10 or more nameless).

Even as an offspring, Reaper steals belongings from deceased adventurer.

The Reaper can be found beyond The Spine.

This section displays the Reaper's natural colors and regions. For demonstration, the regions below are colored red over an albino Reaper. The colored squares shown underneath each region's description are the colors that the Reaper will randomly spawn with to provide an overall range of its natural color scheme. Hover your cursor over a color to display its name and ID.

This section describes how to fight against the Reaper.

Reaper Kings are known to bury towards safety when they reached a certain health, and emerges far away from the player.

The Reaper's have an acid shrapnel attack where they shoot it from there tail. This cause Torpor to rise quickly if stabbed by such, and should be avoided at all cost.

The Reaper's have a tail whip move where they spin In a circle and knock back anything close to it.

Health regenerate quickly when they are not within the charge light radius and not affected by its weakness. During daytime, the health regeneration is slower, but still fast enough to recover any damage dealt towards them.

Only Reaper Queens can impregnate another player, and they only do so at very low health.

Even after death, they leave behind Burning Acid, so its best advised not to get too close when harvesting their remains.

Reapers, much like the Nameless, are weakened by Charge light. Be sure to bring a lantern pet or charge weaponry. if you plan to venture into the darkness.

Wild Reapers cannot be tamed. In order to obtain a tamed Reaper, one must be 'impregnated' by the

Reaper Queen from a tail attack. Using a riot shield may be helpful.

While the player is impregnated, the following things are to be taken into consideration:

The baby takes 2 in-game hours for gestation to be completed. During this time, the player cannot earn XP; the baby will absorb any XP obtained. Once the period ends, the baby forcefully 'ejects' from the player. If the player does not have the effect from

Reaper Pheromone Gland, it will instantly kill them upon 'birth'.

Unlike other babies, Reaper babies will be hostile to players not using

Reaper Pheromone Gland regardless if they are the one who imprinted them, which is found from dead Reaper Queen. Also, they will ignore any whistle command, and will not respond to any behavior changes, and it is well advised to keep them boxed for they move fast and could get away easily until they reached Juvenile, in which they appear more of a Reaper. They however still requires food like

Raw Meat, so it is advised to leave stacks of meat after imprinting them. Another warning: If the player do not imprint the offspring in time, even if they have the buff, they will still get attacked by the baby.

Also, unlike other babies, the gender of the Reaper babies are indistinguishable by default, but it will label either as "Queen", or "King".

How much XP you have 'given' to the baby will alter his/her stat once they are fully grown. They will remain their initial level despite this, but can be further imprinted for additional stat boost. However, the highest number of XP the offspring can take is 52,500 (+75) before it stops absorbing.

An effective way to tame these things would be to construct a safe place to shoot from, like a 2x2 with windows and a door to get in and out or you could just craft a few walls and just hide behind them when required, this MUST be in range of the Trap you are going to construct next.

Now for the Trap,you will need a few small stone Dino gates, in like a horseshoe sort of shape similar to the Giga traps people used to make and lure one of the Reaperqueens's into it using a shield to block it's attacks.

Once it is in your trap, place the last Dino gate to block it in, now using the stone walls/2x2 structure you set up outside your trap, hide behind the walls when the Reaper attacks you and when it stops throw a Plant Z grenade at it and proceed to shoot it with a powerful weapon, repeat this process until the reaper is almost dead (Very very bloody) once it is really bloody just get your shield out and walk up to it and wait for it to impregnate you with its tail, it will then flee the area leaving you with broken bones so makes sure you have healing items with you.