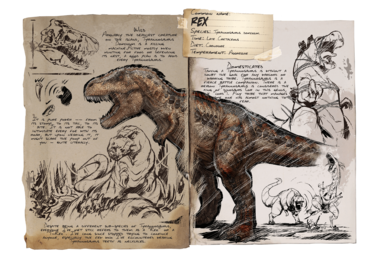 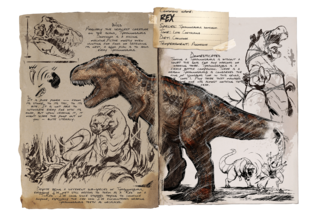 The Tyrannosaurus (tye-RAN-uh-SAWR-us), or simply Rex, is one of the dinosaurs in ARK: Survival Evolved. The Tyrannosaurus is a huge, bulky predator that dominates virtually all of the island. It has considerably more health and stamina compared to Spinosaurus, but lacks the attack speed and mobility that Spinosaurus has. They are also incredibly slow in water, making them vulnerable to attack from below, but they make up for these drawbacks with sheer size and strength.

Highly aggressive, Tyrannosaurus will attack most living creatures in sight aside from other apex predators. They're extremely bulky, having nearly double the health of Spinos of the same level. They also possess surprisingly good stamina for their size, of which is also greater than that of any same-leveled Spinosaurus. What Tyrannosaurus' lack in attacking speed (when compared to a Spinosaurus) they make up for in sheer health. Tyrannosaurus generally ignore mounted tamed animals and choose to attack wild animals instead. However if they see a helpless tame or dismounted human in the open, they will begin to attack.

This section displays the X-Rex's natural colors and regions. For demonstration, the regions below are colored red over an albino X-Rex. The colored squares shown underneath each region's description are the colors that the X-Rex will randomly spawn with to provide an overall range of its natural color scheme. Hover your cursor over a color to display its name and ID.

The Tek Rex is a creature that was permanently added to the game with the ARK: ARKaeology event and is part of the Extinction Chronicles I event. It is a unique alternate of the original Rex, and is purely made of Tek. Unlike the original, they spawn at a 5% rate at a 20% higher level than usual.

Since Rexes are relatively slow and incredibly strong, trying to tame a Rex solo on flat ground can be risky. Bring a few friends and shoot Tranq Arrows at it. it will try flee once torpor gets high but you can easily reach it sprinting.

Therizinosaur with its high damage and attack speed can easily overpower a Rex. Alternatively , a tamed

Spino at a nearby level to the Rex can decimate it as well. If these dinosaurs are not available when facing a higher level Rex, a pack of

Tyrannosaurus has a balanced amount of the primary stats, i.e. damage and health. The Rex is not to be trifled with, especially in the early game. If a player has low stamina (or is low level), the player could run out of stamina and the Rex could easily catch up. Getting it stuck between trees is useless, as it destroys trees as it walks. They can effectively kill a low-level player in only a few bites and reduce thatch structures to nothing in seconds. Even players in flak armor aren't very safe from a continuous Rex assault.

For information pertaining specifically to the real-world Rex, see the relevant Wikipedia article.