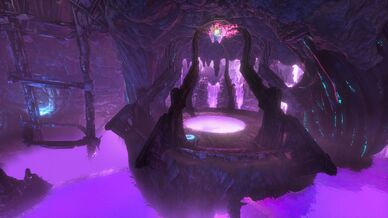 The Rockwell Arena is an arena for fighting the boss of the DLC: Aberration, Edmund Rockwell. The Temperature in the Arena is 10°C or 50°F so only a little Hypothermal protection is necessary.

Path to the Boss[edit | edit source]

A suggested and confirmed path.

For non-climbing dinos and players with portals only showing in the Grave of the Lost terminal a discovered path confirmed by the survivor Zed is shown below. Starting in the Luminescence it winds down to the deepest parts of Aberration with enough space for a

Spinosaurus to complete the path. This path can be continued or started at any listed point as another point may be closer to your base, it is started in the BioLum because of its closeness to a path to the fertile chamber.

This route does not require you to build anything. Although the list seems long, a large part of it is guiding you down a twisting path through the GotL vertical shaft. Some points listed are a precaution to prevent survivors from getting lost.