Single Player is a Game Mode that allows Survivors to play ARK offline. All features of the online game are present, including mods and one-player Tribes. Screenshots taken via NVIDIA Ansel may only be captured in Single Player. 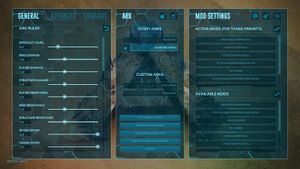 The initial single player setup menu. You may also run a dedicated server from this menu.

In Single Player mode you don't need to authorize yourself as an admin nor do you need a prefix like cheat or admincheat before the commands. Just type the bare command and its parameters after you opened the console with the Tab ↹ key. But it also works with the prefixes.

Single Player mode automatically saves every 15 minutes by default. To manually save, press Tab and enter:

Single Player mode does not support multiple save slots. Each separate map allows one save per map. But only DLC maps have their own directory and a separate character profile. However, by backing up the folders SavedArksLocal and LocalProfiles for The Island or respectively named folders for the DLCs, different saves can be loaded.

There is a configuration option "Use Singleplayer Settings" in the General tab of the Host/Local dialog. When activated some settings (e.g. difficulty) are optimized for single players and small groups (non-dedicated sessions).[1] This option was introduced in 259.0.

The intention behind this change was to soothe the Single Player and Non-Dedicated experience to make it more approachable for those playing in smaller groups. Of course, you don't have to have these settings on, but they will make a significant difference to your game!

These are settings which are automatically enabled in Single Player and Non Dedicated Servers. You can turn them off by disabling the ini setting, or just unchecking the box in your host options. Details for all options can be found in Server Configuration. These are the changes that occur when Singleplayer Settings are activated:

The PerLevelStatsMultiplier values listed in the table above are the current ones. They were changed since 259.0.

In ARK: Survival Evolved Mobile, a Survival Mode can be selected when starting a Single Player. Survival Modes decide certain game functions such as retaining the Inventory after death or losing Experience and Engrams. There are currently three Survival Modes: