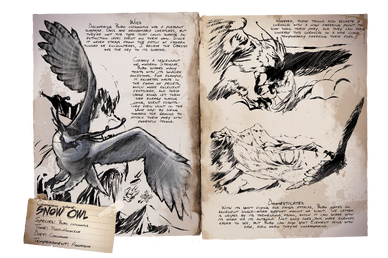 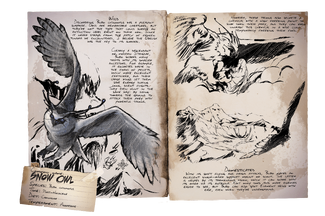 Dossier
These values may differ with what you see in-game or written elsewhere. But that is what the dossier says.
Group
Birds
Species
Bubo chinookus
Time
Post-Holocene
Diet
Carnivore
Temperament
Aggressive
Release Versions 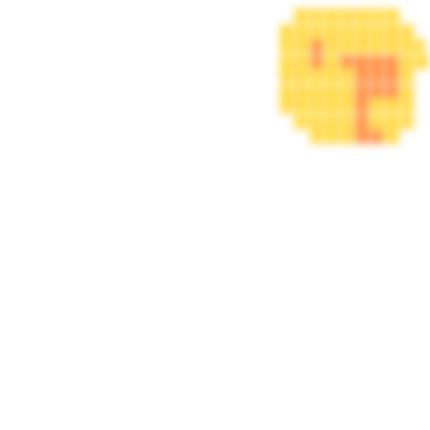 The Snow Owl (Sno-Aoul) is one of the Birds in ARK: Survival Evolved.

The majestic and giant Snow Owl flies around the Snow Dome, occasionally landing to kill an animal or rest. It's an aggressive creature towards nearly everything in sight, and can easily spot any animal in hiding due to its heat vision. Perfectly accustomed to its habitat, it is for sure one of the most powerful predators in the Snow Dome aside from the massive Dire Wolf packs roaming the snowy forests.

The Snow Owl is a massive owl that prefers to live in very chilly regions. It looks and handles similarly to an Argentavis, though it usually has whiter colors for camouflage, has a thicker body, and a larger tail. Its face is wrapped tightly by tendrils of corrupted element, and its eyes look almost robotic in nature. Its wings are incredibly long, and the ends are usually tipped with a darker color than the body, typically being gray or black, with the legs and head usually matching that color. Crowning the top of its head are four large antennae that give it heat vision capabilities, which through these antennae it can share with its rider.

This section displays the Snow Owl's natural colors and regions. For demonstration, the regions below are colored red over an albino Snow Owl. The colored squares shown underneath each region's description are the colors that the Snow Owl will randomly spawn with to provide an overall range of its natural color scheme. Hover your cursor over a color to display its name and ID.

They have very high speeds and utilize a dive bomb attack similar to the Griffin. It can also curl up and freeze itself in place, during which time it will heal itself and others around it. However it will not use any special abilities in the wild.

A Crossbow or Rifle can be used to kill the snow owl without taking much damage. The owl will attack anything near it relentlessly until it dies, so melee weapons and mounts can also be used.

It should be noted that the Snow Owl takes reduced damage from headshots, so aim for the body.

Use a ranged weapon - a Crossbow, rifle, or compound bow will work perfectly here.

Snow Owls are very fast and commonly come in a group of 2 or 3. They take less damage from headshots with ranged weapons as well. If fighting a player with a Snow Owl, they can dive, freeze and heal all at once. Snow Owls have a higher base damage than a Argentavis, and they are also faster.

It has wide turning radius, much like Griffin, so circling around it can kill or knock it out easier.

The Snow Owl can be knocked out through the standard Knockout method using Tranq Arrows. However, the Snow Owl may die if arrows are used as the owl has fairly low base health, especially if it has been in a fight. Using a Longneck Rifle with Tranq Darts is advised.

Similar to Argentavis, you can trap it in a taming pen to prevent it from flying away.

The snow owl is a fairly hard tame to tranq ( 27 regular tranq darts ) but once tranqed you will need no more narcotics for even a level 150. If you dont have enough resources for a trap then kite it with a managarmr or an argentavis ( Be wary of speed ) while carrying another player on the argentavis and having that player shooting it with tranqs.