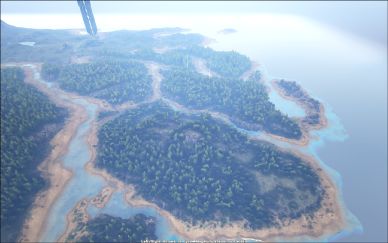 The Southern Islets consist of 5 medium and some smaller islands located in the south of The Island. It has a dense network of rivers, or rather: channels between individual islets, hosting many creatures attracted to water or living in it, though largest waterborne predators can be found closer to the deep waters on South or East. The rivers often have lots of high-end predators, such as Spinosaurs, Raptors, Carnos, and even Rexes. Alpha Carnos and Raptors are also common here. However, these predators are easy to deal with for anyone with a rifle for there are many cliffs to stand on where they can't reach you. There are a few small mountains with metal and crystal on them, and harvesting all of the rocks should yield about 200-400 metal and 10-20 crystal, making it decent for the easy location that they are at. Many forests mean plentiful wood and thatch, and there is never a shortage of Dodos on the beach. Food should be no problem as there are many creatures and easy access to irrigation. Resources are also in abundance, other than crystal and obsidian. Pelt is somewhat hard to get as well. However, a flyer with decent weight and stamina should solve all of these problems.

They form the main part of the south-eastern border to the sea. A small, separated island can be seen South-East from the Southern Islets - it's the South Haven. Attempts to swim directly to the South Haven without a

Wooden Raft are doomed to fail without a very high

Stamina, to say nothing of the threat of aquatic predators such as the Megalodon. To the west is the Footpaw, across a deep river that tends to have Megalodons and Mantas. To the east is Drayo's Cove and the Ocean, and to the north is the Writhing Swamps, and a short distance farther north than that is the Redwoods.

Southern Islets have more Caves than any other single location in the game: