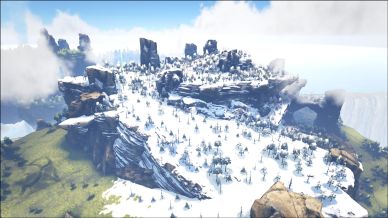 Notice: Until The Center has official region names, this page represents the Snow South spawn area, the snowy coastline, immediate grasslands, and the South Snowy Mountain.

The Snowy Mountain and its slopes are home to dangerous predators thriving in its sub-zero climate. Blizzards are expected here, and survivors will often find themselves freezing even in Fur Armor. The fur trade is centered around the snowy mountains and adjacent grasslands with an abundance of mammals with high-quality Pelt. The snow-covered peak is rich in Metal, large Crystal nodes, and Oil-bearing rocks. It should be noted that the snow-covered peak does not spawn any creatures on the official servers. Thus, as a result, the immediate surrounding areas make for a prime base location due to its close proximity to "danger-free" nodes of metal, crystal, and oil.

The South Ice Cave can be found here.

To the South/Southwest is the Edge of the World, a massive waterfall into nothingness an ocean. To the East is the ocean and Jungles South. The Floating Island and its ring of swamps are to the North. To the West/Northwest is the Green Obelisk and Snowy Grasslands.