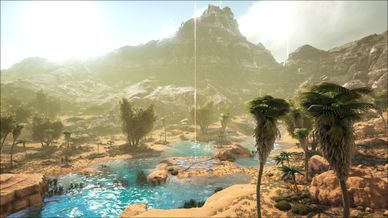 The Southern West Oasis is a region in Scorched Earth.

The Southern West Oasis is a lush biome with one of the only non-depletable sources of water (the other being the Canyons), making it a highly sought-after area for base claims. However, while the Oases themselves have only a handful of predators, they are found in areas surrounded by more predators, meaning traversing to and from the Southern West Oasis can be hazardous. In addition, rival players may stalk weary travelers looking for water.

The two western Oases are surrounded by the Mountains and farther to the west the World Scar is located.

From mountain not afar[edit | edit source]