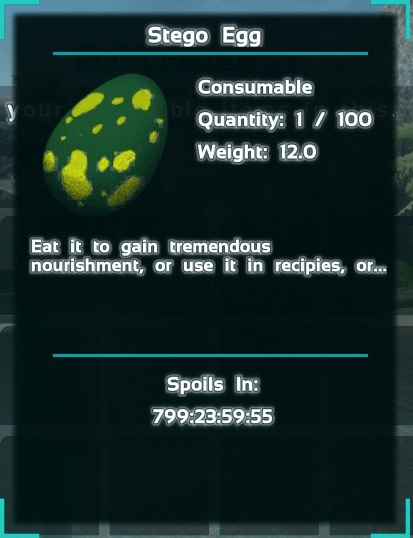 Many items in-game spoil over time, that is decay while in an inventory or container. Spoil times can vary based on where the item is located. The map Scorched Earth has a global spoilage multiplier of 0.9.

Each item that spoils has a base spoil time, which is the amount of time it takes for one of the items to decay while in the player's inventory. However, certain containers apply a multiplier to this value, making them last longer.

*Only applies to Produce while Fertilised. 1x if not.

In the DLC: Scorched Earth,

Keep in mind that full stacks of the same good (20, 30 or 100) will take proportionally longer to spoil. For example, stacking up to 100 makes berry stacks last way longer than the per unit spoil time indicates.

Note: One stack of 20 raw meat in a feeding trough takes 13.33 hours to spoil. Bear this in mind when raising juvenile or adolescent dinosaurs.

6 Nameless Venom can not be stored in a Refrigerator.