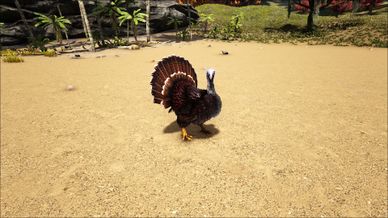 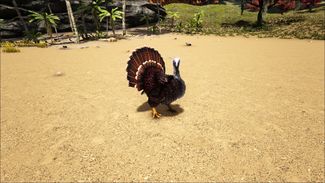 Wishbone from turkeys allow players to craft a Chieftain Hat, "Turkey" Emote, or summon the DodoRex.

Super Turkeys look like modern day turkeys, but are extremely powerful. Don't be fooled about their appearance! They can kill you easily! They have extremely high defense so make sure to bring extra help in the form of a flying creature, giga, or friends. 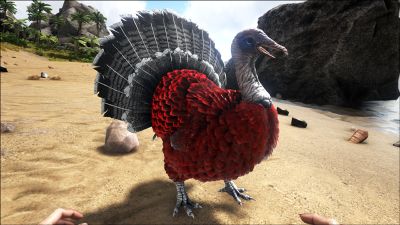 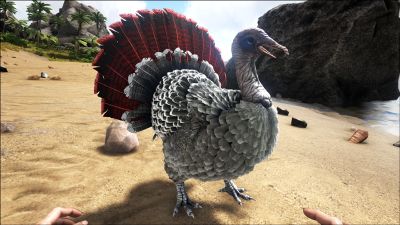 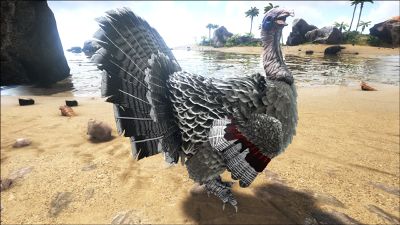 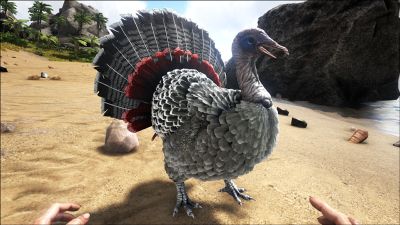 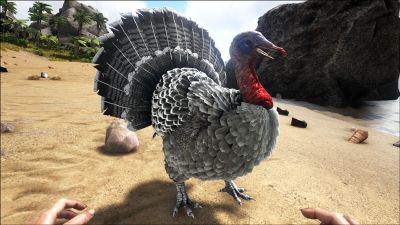 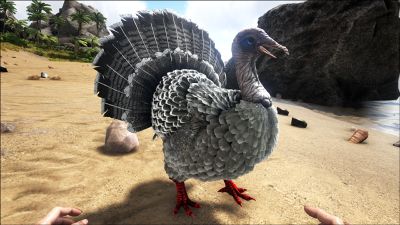 Note: The Wishbone can be obtained from the Turkey's death item cache on the ground where it dies if the corpse is harvested. Otherwise you can access its inventory in order to get it.

This section describes how to fight against the Turkey.

Super Turkeys hit hard, and take massively reduced damage from tamed creatures. All tames (with the exception of Giganotosaurus and Managarmr) are useless against it. However, tames may be useful for fending off the wildlife that automatically become aggressive when they are near an aggro'ed Turkey. If you don't have access to a Giganotosaurus or an Managarmr, using firearms is one of the safest, and easiest methods available to kill a Super Turkey.

If you have a Giganotosaurus use it. You can also use a mantis holding melee weapons. If you have neither, you can stand on top of any stone platform and use firearms, though it is possible using more primitive weapons such as the bow.

The turkey cannot damage stone so you can attack it from on top of a stone pillar and render it incapable of damaging you. Or shoot it with a ranged weapon from a safe spot, e.g. from a Quetzal platform saddle. And although they are fast in water, they cannot attack while in water, allowing for you to either retreat or kite it and kill it without taking much damage (although its hard to hit due to its swim speed) If you are able to get one into the water the Dunkleosteus also seems to lack the damage debuff.