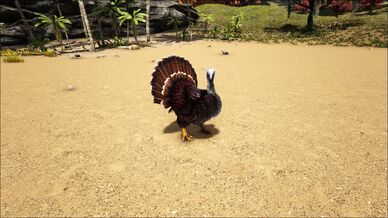 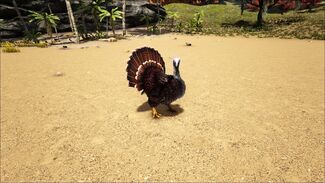 Super Turkeys look like modern day turkeys, but are extremely powerful. Don't be fooled about their appearance! They can kill you easily! They have extremely high defense so make sure to bring extra help in the form of a aerial creatures,

The Wishbone can be obtained from the Turkey's death item cache on the ground where it dies if the corpse is harvested. Otherwise you can access its inventory in order to get it.

Super Turkeys hit hard, and take massively reduced (only 10%) melee damage from other creatures, rendering tames with no ranged attacks or with low melee damage useless against it. However, those tames may be useful for fending off the wildlife that automatically becomes aggressive when near an aggroed Turkey. Using firearms, even though they deal only 70% of damage to the Turkey, is one of the safest and easiest methods available.

If you have a Giganotosaurus use it. You can also use a Mantis holding melee weapons. If you have neither, you can stand on top of any stone platform and use firearms, though it is possible using more primitive weapons such as the Bow.

Managarmr are the best choice for taking them down, their breath attack and freeze makes short work of the Turkeys!

Its attack inflicts Rage, causing any skittish creature to immediately run off, while any other temperament creatures will attack.

Despite its size, its impossible to immobilize it by any ways, even using creatures that usually can pick smaller creatures such as

Megalosaurus, and incapacitating creature such as

The Turkey cannot damage stone so you can attack it from on top of a stone pillar and render it incapable of damaging you. Or shoot it with a ranged weapon from a safe spot, e.g. from a

Quetz Platform Saddle. And although they are fast in water, they cannot attack while in water, allowing for you to either retreat or kite it and kill it without taking much damage (although its hard to hit due to its swim speed) If you are able to get one into the water, the

The Turkey has no resistance against non-melee dino attacks, such as the

Velonasaur's Spindels. It also does not have resistance against some damage types like