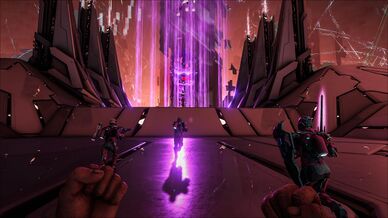 The System Root is an arena for fighting the final boss of Genesis: Part 1 DLC, the Corrupted Master Controller.

Unlike the other bosses, the bosses comes in four phase, out of which the first three phase renders him immune to any direct hits until it is cleared. A timer will immediately begin counting down from several minutes based on the timer within which the entire arena must be cleared. Once the timer expires all players and dinos in the arena are destroyed.

The following number of missions are required (for the starter) to start the Final Trial:

Only one Final Trial may be started at any point of time.

Attack Drones appears in the variant of Corrupted Dinotar.

Human will appear as part of the created corrupted avatar, each wielding a corrupted data variant of their equipment.

They may carry the following (They will still carry those same weapon from earlier phase as the progress goes on):