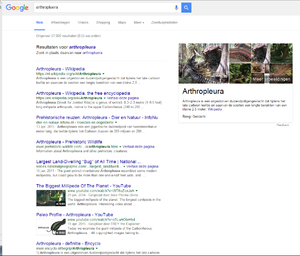 This is my search result

All official sources speak of the Arthropluera, so I'd leave it as long as they not changing it. The content of the game is partly fictional so it might be on purpose. --Cadaeib (talk) 09:32, 18 September 2015 (UTC)

I'm on Xbox, and have noticed that the Corrupted Arthropluera does not attack on sight. In fact, I can walk up to one on foot with no console commands except gamma, r.lightshafts and r.bloomquality active, and it will just go about its business. The only time one has attacked me is when I attack it first, which leads me to believe that the Corrupted Arthropluera is a neutral creature, like a regular Triceratops or Stegosaurus. I assume this is a bug.

Anyone else have this happen?