All the Foundation, Pillar, Wall, and Ceiling pages erroneously say that after placing the maximum number of ceilings away from foundation or pillar support (2 on the x and y and 1 diagonally) you will not be able to place walls on the ceiling in question. You can currently place walls both above and below the maximum limit away from foundations and pillars or you wouldn't see ginormous house boats people drive around. I tried it out on a fresh single player game. If no one has any data contradicting this, I'm going to update all the pages in the next day or so to remove that blurb.Sulhir (talk) 03:40, 1 August 2016 (UTC)

Of course you can build bigger boats. But you will have to tweak some settings for these huge boats and/or use a modded raft. Rafts - additionally to the foundation distance limit - have a limit how far you can build away from the raft (even when using the following trick). The foundation limit you can go around using the foundation-under-a-ceiling trick. But then you have a foundation and you can go the usual 2 ceilings in each 90 degree direction but not the corner. Maybe I didn't get what you want to say, so could you please specify what exactly you tried out? Only yesterday I was building on a raft (actually it was the barge from the Big Raft mod) and I had still the 2-x/y-1-diagonally limit. Flachdachs (talk) 07:36, 1 August 2016 (UTC)

I'm not sure how the platform limit is effecting your ability to build out further. I haven't ever seen it in game even with an unaltered platform limit. The only difference the platform limit makes is how many objects you can place on the raft, it has no effect on the actual mechanics of placement. I was doing this on the new tree platforms just last night and unsurprisingly could build walls two ceilings out. I'll delete all my mods and reset my .ini files later today to test it out but I really don't understand how that's occurring for you. I'll try it on the various platforms available and on the ground to see if i can replicate what you're describing.Sulhir (talk) 13:45, 1 August 2016 (UTC) 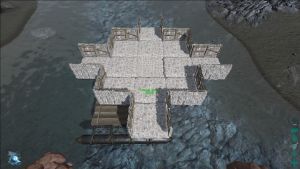 For clarification
So basically the wording on the wiki is just vague and I didn't understand what it was talking about. It seems to only be referring to ceilings extended two away and not the diagonal ones. Pikter. Sulhir (talk) 01:11, 2 August 2016 (UTC)

Ah, now I see what you mean. You can put walls on all the other edges except for the far ones. So let's change it to something like "the far ends of the ceiling that are two away will not be able to support a wall" and include this picture. Think that will alleviate further confusion?
-- Mr Pie 5 (talk) 01:35, 2 August 2016 (UTC)

Even better, I took this diagram that was on the Wooden Pillar page, and marked the troublesome edges in red. We can just apply this template to the relevant pages for a much clearer meaning.
-- Mr Pie 5 (talk) 02:18, 2 August 2016 (UTC)