Does anyone has precise data on what amount of damage the Metal Spike Wall / Wooden Spike Wall do, how much to smaller/bigger Creatures or players? Especially, what are Spikes usefull for on a PvE-server? Devs said on 2015-06-19 that Spikes do not damage wild dinos, is this still valid?

Rumors say, if a wild dino attacks Spikes directly, it will be killed (on PvP or PvE?).

Short said, are there answers to these questions? They should be added to the pages.

Just saw a Rex chewing on Metal Spikes on a PvP-server for 20 mins, it didn't hurt him a bit. Seems wild dinos are completely unaffected by them and walk just over them. That means building them directly near walls is dangerous because they can be used as ramps to climb over the wall. --Cadaeib (talk) 00:16, 3 October 2015 (UTC)

I came across damage values for spikes in the devkit once. I'll see if I can find them again. I don't personally use them though, so I can't say anything about their usefulness, and I've heard plenty of complaints about them not working properly. I saw the devs say recently that spikes will only hurt dinos that are directly attacking them, so maybe the rex was actually attacking the wall behind them and the splash damage that the spikes were taking didn't count as being "attacked"? --Mr Pie 5 (talk) 03:03, 3 October 2015 (UTC) 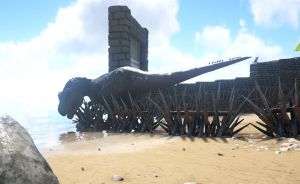 It seems their only benefit is to hinder other players to land their birds on your roof and as buffer in front of walls to keep smaller creatures on distance. And of course the optical-style. Other than that they apparently only hurt yourself and your animals. The Spikes were standing 5 m in front of the walls (see image on the right), the rex definitively attacked them directly. And no damage after 20 mins (neither for the rex nor for the spikes being metal).--Cadaeib (talk) 10:15, 3 October 2015 (UTC)