The Center Arena (The Center) 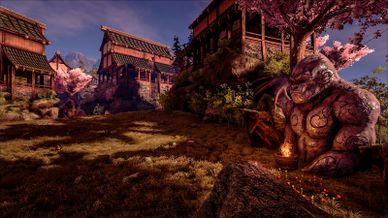 The Center Arena is a location in the DLC: The Center. It appears to be an abandoned monastery worshipping the Megapithecus, as evidenced by various statues.

Upon teleportation to the Center Arena, both the

Megapithecus will appear and fight the players at the same time. A timer will immediately begin counting down from 25 minutes, so both bosses must be defeated within that time. Once the timer lapses, all players, dinos, and items in the arena are destroyed.

Both bosses will always spawn at level 1. The Broodmother's

Mesopithecus will always spawn at level 100.

The following items are needed to open The Center Arena Portal:

This section describes how to fight against the Broodmother Lysrix and Megapithecus.

This arena has no environmental danger, such as lava rivers or cliffs, so bringing a lot of unridden tames without controlling by players is quite safe.

Use 1 tame to distract the Broodmother and have your other tames deal with the Megapithecus.

As always firearms should be used as a last resort.

And try not to fight two bosses at the same time.