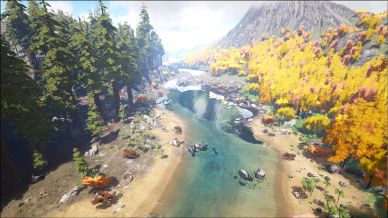 The region name does appear in-game at sporadic intervals along the northern shore of the river, particularly to the west, which may be an oversight on the part of the developers when the new biome was introduced. The majority of this region is simply referred to as "Unknown Region", but has a unique and consistent spawn population.

Part of the region is known colloquially as "Black Sands Beach", due to the ashen colored ground on the riverside south of the Volcano.

The Volcano and The Maw reside to the north and the The Redwood Forests to the south. To the east, the river forks toward Smuggler's Pass and Writhing Swamps, with the river to the west also connecting to the swamp.