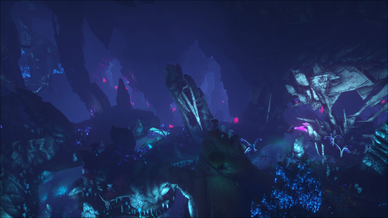 The Overlook is an area just as things are getting darker. It overlooks much of Aberration as you can see many other areas down deeper into the Ark. Crystal and creatures with charge start to get more abundant here. Other than the streams, water is scarce with height along with a temperature increase making dehydration a big issue. A good survivor would bring a Climbing Pick or build a Zipline (A parachute would work too) for safe travel here. A river/waterfall separates The Overlook from the Luminous Marshlands.

Rock Drakes and Megalosauruses litter the land while Karkinos, Baryonyxes, Electrophorus, and Sarcos stalk the rivers. Note that the Megalosaurus and Karkinos can both dismount the player, the former by picking up small mounts and the latter by plucking you off from small/medium ones. The Electrophorus and Baryonyx can also dismount the player via stuns so wade the waters carefully.

To access The Elements Region(The Lost Roads) by foot first enter The Overlook through the entrance around 45 Latitude, 45 Longitude. Follow the trails south west until you encounter a river; If you travel south east you will find the waterfall that separates this region from The Luminous Marshlands. Once at the river you can see an obvious change in the environment towards the south with the land blackened and spotted with withered trees. This demarcates a radiation zone along with more cliffs to see further below. The entrance to The Lost Roads lies to the west by following the river. You must cross the river at one point or another in order to get there.