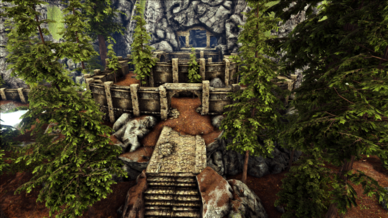 The Stronghold is a ruin on Valguero DLC.

No creature spawns inside The Stronghold.

-As of now you are unable to build in parts of the stronghold, including the main hall.

-While not exactly the same, the fortress bears a strong resemblance to The Lord of the Rings' fortress called Helm's Deep, as seen in the movies and original art.

-This is supported by the details of the Stronghold, it has an exterior outer wall protecting another section of the mountain face, were a small stream enters the fortress there is a large gap in the Wall.

-This is identical to Helms deep as in the Lord of the rings, Saruman uses bombs to damage the Coombe wall and let his orcs storm the fortress.