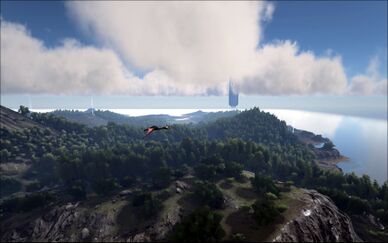 The Western Plains is a plains and plateau area in the northwest area of the The Island.

The central feature of The Western Plains is a high, cold plateau directly South of Whitesky Peak, previously known as The Radiant. This Cold Plateau, while appearing to be a temperate zone, is actually within the freezing boundaries of the otherwise snowy cold zone surrounding the Whitesky Peak. There is a mostly temperate sliver of land at the South end of the plateau, just above the dense forest to the South. The Cold Plateau slopes down to the North and East to a river that separates The Western Plains from Whitesky Peak and the Volcano, respectively. The Eastern slope is heavily forested to the South, and transitions to a cold Tundra to the North. If you travel directly towards the Volcano from the Cold Plateau, you'll come down to the river, which is heavily populated by predators such as Spinos, Rexes and Raptors, and high-tier herbivores such as Ankylo, Stego, and Doedicurus. There is an island in the river here, and the river drops down a waterfall to the South. Despite the presence of many large predators, this is one of the best land approaches to the Volcano and the path leading to the Crater. 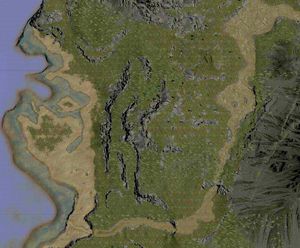 180° panorama of The Western Plains from a small islet on a river, with Whitesky Peak clearly visible at the North
Retrieved from "https://ark.gamepedia.com/index.php?title=The_Western_Plains&oldid=405629"
Category: