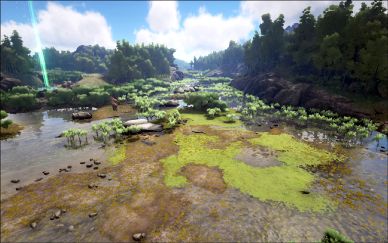 Most of the region is covered in shallow water with many Mangrove-like trees. An amphibious mount is recommended for traversing the area with haste. Not a good place for a base due to the lack of flat ground and the large numbers of

Sarcos that patrol the area. A good place to go hunting with a

Beelzebufo because of the large numbers of

Meganeura, but watch out for predators.

Almost every creature in the swamp can injure the player, with only a few exceptions. Some hunt the player down, while others react violently when attacked. While it contains some valuable resources, the swamp should not be a place for casual or beginning players to pass through.

Dilo wander the sandbars in small squadrons, biting other animals and chasing players down with their deadly slowing capabilities. The

Titanoboa slither out of the water in great numbers, knocking players unconscious and then proceeding to kill them. They often contain valuable loot in their inventories, but otherwise they should be avoided at all costs. Be wary also when walking near the shores, for

Kaprosuchus lie waiting in the water, ready to pounce on any unsuspecting passers by. They have a devastating leap attack, capable of knocking players off of smaller mounts and carrying them away. However they are not very fast on land and if you can dodge their leap attack they will fall easily with the right weapons or a powerful mount. The Kaprosuchus' larger cousin,

Sarcosuchus also dwell in the swamps. While they lack the surprise attack, they are still formidable predators, with a fearsome attack and plenty of health, avoid unless if you are armed with a ranged weapon or a strong mount.

Beelzebufo hop about in the mangroves, staying passive until a player instigates a battle.

Dimetrodon bask in the sun, sitting until a player attacks it, where it can then do heavy damage. If a

Paraceratherium is attacked, then the player should back away to avoid being crushed.

Meganeura swarm when carcasses are left to rot.

Leech are common there. Be sure to bring a friend with you to help you removing any leech attached to you, or use fire. Otherwise try to avoid going into deep water. Since almost all the animals employ poison and slowing effects on the player, the swamp can cripple even the best of players. The only truly passive animal on land is the Achatina, which you can either kill for small amounts of meat and chitin or tame for the useful cement paste. As they are abundant in the swamps, they can make for a great emergency or easy meal, just be careful of Meganeura swarms.

The waters in the swamps also hold the danger of abundant shoals of Piranha, while the passive Coelacanth is much rarer. This means food from the water will be harder to acquire; you'll either need to fight the megapiranha or fish with rare leech blood.

The Weather of the swamps is unpredictable, and can pose a danger to the unprepared and a nuisance to the prepared. During the day it is oftentimes very hot on land, and freezing in the water. At night it will be almost exclusively cold, with the danger of hypothermia wherever you are.