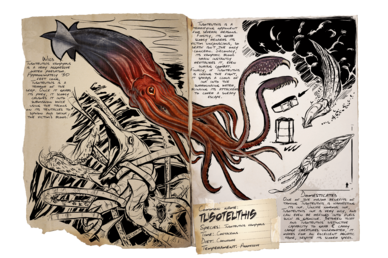 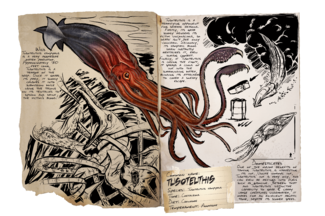 Dossier
These values may differ with what you see in-game or written elsewhere. But that is what the dossier says.
Group
Invertebrates
Species
Tusoteuthis vampyrus
Time Period
Cretaceous
Diet
Carnivore
Temperament
Aggressive
Release Versions

The Tusoteuthis (too-so-too thiss) is an aquatic creature in ARK: Survival Evolved.

Tusoteuthis is found only in very deep water, where it swims about at a slow pace. If it spots the player or a tamed creature, it will begin to move itself towards the player or said creature and attack it. Because of the unique body plan of cephalopods, a Tusoteuthis must turn itself around to strike with its tentacles.

A monstrous relative of the vampire squid, Tusoteuthis bears a closer resemblance to giant squids, but is much more terrifying than its timid kin. Tusoteuthis has powerful tentacles with hooked suckers, capable of drawing blood and keeping even a Megalodon from escaping a horrible fate. A parrot-like beak hides in the center of the writhing mass, ripping flesh, shell, and bone into easy-to-swallow bits. Tusoteuthis also possesses the ability to spray an oily ink if it is in danger. Tusoteuthis is a true terror of the deep.

This section displays the Tusoteuthis's natural colors and regions. For demonstration, the regions below are colored red over an albino Tusoteuthis. The colored squares shown underneath each region's description are the colors that the Tusoteuthis will randomly spawn with to provide an overall range of its natural color scheme. Hover your cursor over a color to display its name and ID. 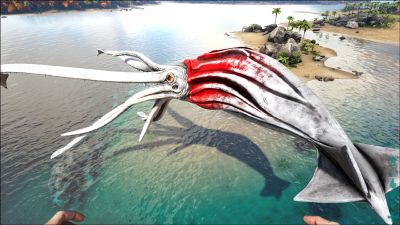 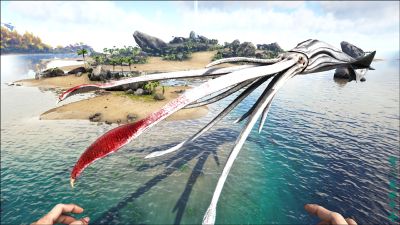 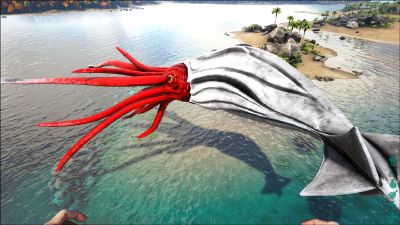 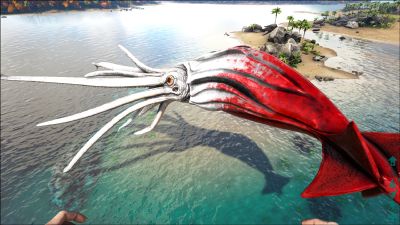 The Taming Affinity (progress) gained for food types other than Black Pearls is only 10% of the value derived by other tames (e.g. 15 from Prime Meat instead of 150), and so at least 10 should be fed at a time to have a comparable taming time to other creatures. Due to the exceptionally low Affinity from individual items, they have been omitted from the table below, which consequently omits

Please ignore the Feeding Interval and Taming Time data (below). Due to being able to eat when at 90% of its maximum Food, the minimum Feeding Interval is 177.5 seconds[2] plus 14 seconds per Food Level.[3]

Note that 50 Black Pearls will still restore up to 1500 Food regardless of the creature's current Food when fed, and so Starve Taming will actually take longer as the full 1500 food will need to deplete per required consumption (compared to allowing 10% to deplete each time).

While riderless, the Tusoteuthis will not wait long to let go of your creature - making a team of two the safest option, as the distraction's rider can remain mounted until the creature is fed and then dismount themselves and swim up. If you do attempt to solo tame, flippers are recommended for speedy getaways. Make sure your tame is on passive and set to follow, and if it survives the feeding it will swim up to safety the moment the squid lets go.

An alternative strategy to solo tame the Tusoteuthis by one's self is to be mounted on a Basilosaurus and have multiple other tame/s set to follow the rider and bbrought to the Tusoteuthis as bait. Basilosaurus is immune to being grappled by the Tusoteuthis's tentacles,and will provide a safe,quick means of escape and/or putting distance between you and the squid between it's feeding intervals while the other tame/s serve as the target/s of the squid's aggression,and grapple; allowing the player to begin taming it. Keep in mind that the Tusoteuthis will most often spawn at depths that will cause the Basilosaurus to slowly take damage ,however,a high level Basilosaurus that has had it's Health increased sufficiently should be able to tank this damage with no issues what-so-ever.

After taming, its diet remains the same (Black Pearls, Meat and Fish).

However, Tusoteuthis will now eat regular meat and raw fish meat. It does not require black pearls for food when domesticated.

This section describes how to fight against the Tusoteuthis. Generally the squid is a very strong enemy, a confrontation should be avoided if you're not sure you can win.

A low-level Tuso is no match for a mid-to-strong tamed Plesio or Mosa. A high level one will need a very strong mount with a good saddle or a group of powerful sea dinos to be defeated. Remember that a ridden tame cannot retaliate when within Tuso's tentacles. If you're going for a pack attack, let the squid grab the dino you're riding, as you will be able to watch out for the health and the torpor of your mount and you'll have one more source of damage. When it sprays ink and tries to flee get out of the ink cloud, wait for the blinding effect to end and then easily chase your prey.

You can also use another Tusoteuthis to fight it. Focus mainly on melee damage, with a little health. Swim up to the Tusoteuthis and start attacking it. It will try to grab you, but it is not able to. Keep attacking it until it tries to flee. Because the Tusoteuthis has a wide turning radius, you can keep hitting it as it tries to turn. If it is a lower level, you should be able to kill it before it gets away. If it gets away, follow it. Tamed Tusoteuthis have double the movement speed of wild ones, so you should be able to catch it. As long as the wild squid is near the ground, it will probably run into rocks, where you can kill it.

Crossbow, it will try to attack you but it's large hitbox doesn't allow it to turn effectively and it will start to turn around randomly, unable to hit you.

Ranged weapons can work if used while riding a high-level dino. Due to the fast rising of Tuso's health pool, it's advised to use this tactic only on low-level ones.

Its high health, good dps, life-draining attacks and grab mechanics make the Tuso a deadly enemy. Living only in the deepest seas, other animals can join the fight and turn the battle into carnage. Try to stay away from the bottom of the sea as the Tuso may drop its prey under the ground, thus killing it.

Although they cannot grab a Basilosaurus with their tentacles, their ink is still effective. Basilo riders should take caution at the end of the battle with them.

For information pertaining specifically to the real-world Tusoteuthis, see the relevant Wikipedia article